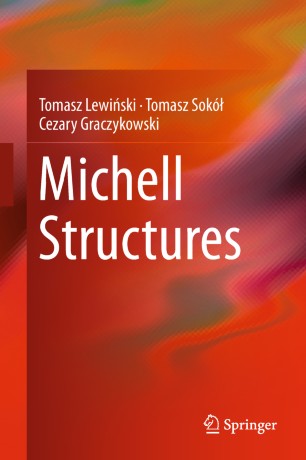 The book covers the theory of Michell structures being the lightest and fully stressed systems of bars, designed within a given domain, possibly within the whole space, transmitting a given load towards a given support. Discovered already in 1904 by A.G.M. Michell, the structures named after him have attracted constant attention due to their peculiar feature of disclosing the optimal streams of stresses equilibrating a given load and thus determining the optimal layout of bars. The optimal layouts emerge from among all possible structural topologies, thus constituting unique designs being simultaneously light and stiff. The optimal structures turn out to be embedded in optimal vector fields covering the whole feasible domain.
Key features include: a variationally consistent theory of bar systems; recapitulation of the theory of optimum design of trusses of minimum weight or of minimal compliance; the detailed description of the ground structure method with the newest adaptation scheme; the basis of 2D Michell theory for a single load case; kinematic and static approaches; 2D benchmark constructions including the optimal cantilevers; L-shape domain problems, three forces problem in 2D, bridge problems; revisiting the old - and delivering new - 3D benchmark solutions; extension to multiple load conditions; Rozvany’s grillages; Prager structures for transmissible loads; industrial applications.
The book can be useful for graduate students, professional engineers and researchers specializing in the Optimum Design and in Topology Optimization in general.