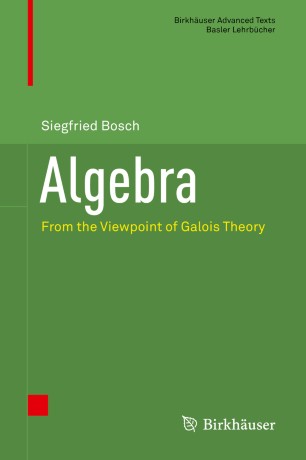 From the Viewpoint of Galois Theory

The material presented here can be divided into two parts. The first, sometimes referred to as abstract algebra, is concerned with the general theory of algebraic objects such as groups, rings, and fields, hence, with topics that are also basic for a number of other domains in mathematics. The second centers around Galois theory and its applications. Historically, this theory originated from the problem of studying algebraic equations, a problem that, after various unsuccessful attempts to determine solution formulas in higher degrees, found its complete clarification through the brilliant ideas of E. Galois.

The entire book is self-contained, up to a few prerequisites from linear algebra. It covers most topics of current algebra courses and is enriched by several optional sections that complement the standard program or, in some cases, provide a first view on nearby areas that are more advanced. Every chapter begins with an introductory section on "Background and Overview," motivating the material that follows and discussing its highlights on an informal level. Furthermore, each section ends with a list of specially adapted exercises, some of them with solution proposals in the appendix.

The present English edition is a translation and critical revision of the eighth German edition of the Algebra book by the author. The book appeared for the first time in 1993 and, in later years, was complemented by adding a variety of related topics. At the same time it was modified and polished to keep its contents up to date.