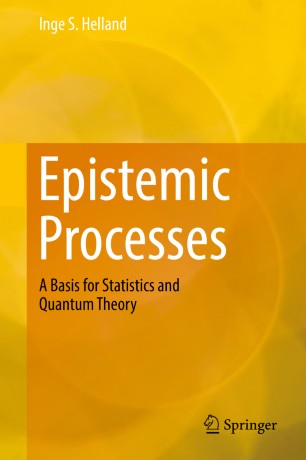 A Basis for Statistics and Quantum Theory

This book discusses a link between statistical theory and quantum theory based on the concept of epistemic processes – which can be e.g. statistical investigations or quantum mechanical measurements, and refer to processes that are used to gain knowledge about something. The book addresses a range of topics, including a derivation of the Born formula from reasonable assumptions, a derivation of the Schrödinger equation in the one-dimensional case, and a discussion of the Bell inequality from an epistemic perspective. The book  describes a possible epistemic foundation of quantum theory. Lastly, it presents a general philosophical discussion of the approach, which, principally speaking, is not restricted to the micro-world. Hence the book can also be seen as a motivation for further research into quantum decision theory and quantum models for cognition. The book will benefit a broad readership, including physicists and statisticians interested in the foundation of their disciplines, philosophers of science and graduate students, and anyone with a reasonably good background in mathematics and an open mind.