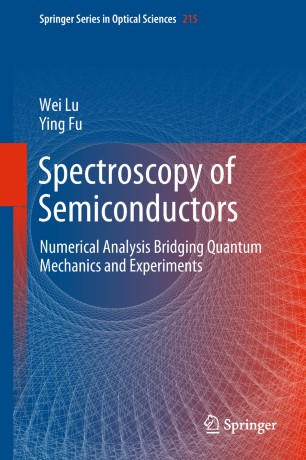 The science and technology related to semiconductors have received significant attention for applications in various fields including microelectronics, nanophotonics, and biotechnologies. Understanding of semiconductors has advanced to such a level that we are now able to design novel system complexes before we go for the proof-of-principle experimental demonstration.

This book explains the experimental setups for optical spectral analysis of semiconductors and describes the experimental methods and  the basic quantum mechanical principles underlying the fast-developing nanotechnology for semiconductors. Further, it uses numerous case studies with detailed theoretical discussions and calculations to demonstrate the data analysis. Covering structures ranging from bulk to the nanoscale, it examines applications in the semiconductor industry and biomedicine. Starting from the most basic physics of geometric optics, wave optics, quantum mechanics, solid-state physics, it provides a self-contained resource on the subject for university undergraduates. The book can be further used as a toolbox for researching and developing semiconductor nanotechnology based on spectroscopy.

Dr. Ying Fu works at Royal Institute of Technology, where he teaches physics and biophysics, and conducts research focusing on studying and developing bio-conjugated quantum dots (QDs) as in vitro and in vivo biomarkers for studying molecular events of clinical relevance, both theoretically (advanced solid-state theories as well as first-principles theories involving heavy computing on nanostructures, nanophotonics, and nano-bio photonics), and experimentally with a particular strength in live cell and super-resolution bioimaging.

Dr. Wei LU is the professor in Shanghai Institute of Technical Physics, Chinese academy of sciences. His research field is in the opto-electronics, focusing on the quantum effects and their applications. He has developed the new spectroscopy methods to study the semiconductor quantum structure, including quantum well, quantum wire and quantum dots. His developed LED and integrated optical filter have been used in satellite.

“This is a very good undergraduate-level text presenting the basics of optical spectroscopy of solids and the most widely used spectroscopy techniques. … Well suited for students in Physics, Chemistry, Materials Science and Engineering, the book is easy to read and gives the basic concepts and tools; as such, it can be a good reference for researchers as well.” (Adele Sassella, Il Nuovo Saggiatore, Vol. 35 (3 – 4), 2019)