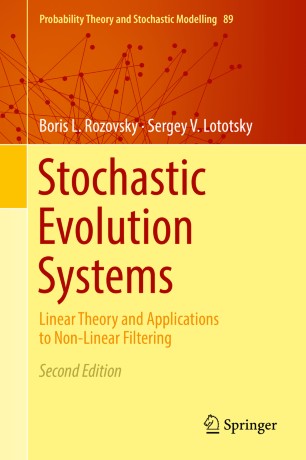 This monograph, now in a thoroughly revised second edition, develops the theory of stochastic calculus in Hilbert spaces and applies the results to the study of generalized solutions of stochastic parabolic equations.

This book will appeal to anyone working in disciplines that require tools from stochastic analysis and PDEs, including pure mathematics, financial mathematics, engineering and physics.

Sergey Lototsky earned a Master’s degree in Physics in 1992 from the Moscow Institute of Physics and Technology, followed by a PhD in Applied Mathematics in 1996 from the University of Southern California. After a year-long post-doc at the Institute for Mathematics and its Applications and a three-year term as a Moore Instructor at MIT, he returned to the department of Mathematics at USC as a faculty member in 2000. He specializes in stochastic analysis, with emphasis on stochastic differential equation. He supervised more than 10 PhD students and had visiting positions at the Mittag-Leffler Institute in Sweden and at several universities in Israel and Italy.

“The book will be useful for those who are working in the area of applications of stochastic evolution systems in physics, biology and control theory, and require tools from stochastic analysis and partial differential equations.” (Anatoliy Swishchuk, zbMATH 1434.60004, 2020)
“A remarkable quality of this monograph is that the results are stated and proved with a great level of generality and rigor. The reader will find many interesting results, as well as lots of long and technical proofs … .” (Charles-Edouard Bréhier, Mathematical Reviews, October, 2019)
Buy options