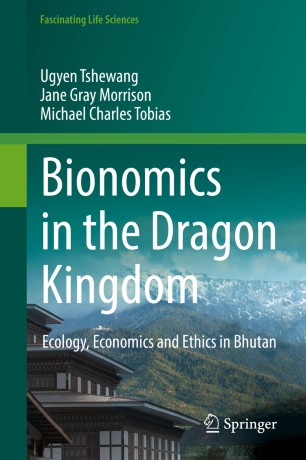 Bionomics in the Dragon Kingdom

Ecology, Economics and Ethics in Bhutan

This compact and elegant work provides a readily accessible and highly readable overview of Bhutan’s unique opportunities and challenges; all her prominent environmental legislation, regulatory statutes, ecological customs and practices, both in historic and contemporary terms. At the same time, Bionomics in the Dragon Kingdom places the ecological context, including a section on animal rights in Bhutan, within the nation’s Buddhist spiritual and ethical setting. Historic contextualization accents the book’s rich accounting of every national park and scientific reserve, as well as providing up-to-the-minute climate-change related hurdles for the country.

Merging interdisciplinary sciences, engineering and humanities data in a compelling up-to-date portrait of the country, the authors have presented this dramatic compendium against the backdrop of an urgent, global ecological time-frame. It thus becomes clear that the articulated stakes for Bhutan, like her neighboring Himalayan and Indian sub-continental countries (China, India, Bangladesh and Myanmar), are immense as the Anthropocene epoch unfolds, affecting every living being across the planet. Because Bhutan’s two most rewarding revenue streams derive from the sale of hydroelectric power and from tourism, the complexities of modern pressures facing a nation that prides herself on maintaining traditional customs in what has been a uniquely isolated nation are critical.

The three authors have tremendous Bhutanese experience: Dr. Tshewang is Bhutanese and lives in Thimphu. He grew up in the eastern province of Pemagatshel and was the first PhD from Bhutan's Ministry of Agriculture, dealing specifically in the ecodynamics affecting livestock and populations. He went on to become the highest ecological official in the Bhutanese government, founding the National Biodiversity Centre, the country’s National Gene Bank and the National Herbarium. Dr. Tshewang was Governor of the nation's eastern-most province, Trashiyangtse, as well as being the Secretary of the National Environment Commission. He led the task force representing multiple stakeholders to develop the Biodiversity Act of Bhutan while leading the National Biodiversity Center of Bhutan. Dr. Tobias led one of the very first outside expeditions to Bhutan in the mid-1970s and has been returning ever since. In 2007 he led a 140-kilometer ecological survey of the most recently consecrated scientific reserve in the country’s far-east, Sakten(g). Highly respected global ecologists, Dr. Tobias, and his partner, Jane Gray Morrison have for nearly 20 years run the Dancing Star Foundation –DSF (www.dancingstarfoundation.org; www.dancingstarnews.com) which is devoted to international conservation biology, animal protection and environmental education. DSF was a major donor for the Smithsonian Folklife Festival in 2008 in Washington D.C., - following upon Dr. Tshewang’s proposal to the Royal Government of Bhutan that Bhutan be part of that festival. The event succeeded in bringing nearly 150 Bhutanese for ten days to the National Mall in Washington where, among other things, in conjunction with NASA, a Bhutanese monk (and Director of Bhutan’s National Museum) had a discussion with an astronaut on inner and outer space. Tobias and Morrison have authored, co-authored and edited over 50 books between them.