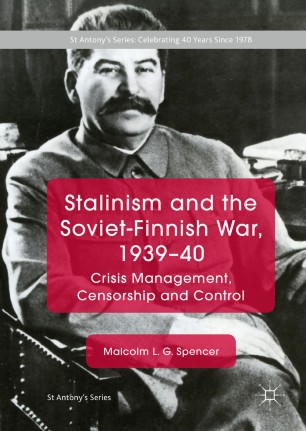 This book offers an illuminating bridge between the political and social dimensions of the Soviet-Finnish War of 1939-40. The conflict represented a significant crisis for the Soviet Union, inspiring international condemnation and a significant loss of face for its supporters, both at home and abroad. The focus of this study is not upon the military dynamics of the war, but upon its ability to influence events, interpretations and interactions between agents and institutions within the Soviet Union and the wider international communist movement. Through original archival research, this book considers the ways in which the Soviet leadership reacted to the crisis, the tools at its disposal, and the effectiveness with which it managed to manipulate and control the spread of information through official and unofficial channels.It contributes to a more complete and complex picture of the inter-related nature of Soviet politics, propaganda and mass media in this period.

Malcolm L. G. Spencer has focused his research on the impact of the Soviet-Finnish War of 1939-40 on the international communist movement. He was previously awarded the ‘Evan & Peggy Anderson Essay Prize’ from the Russian & Eurasian Studies Centre at St Antony’s College, Oxford in 2015.