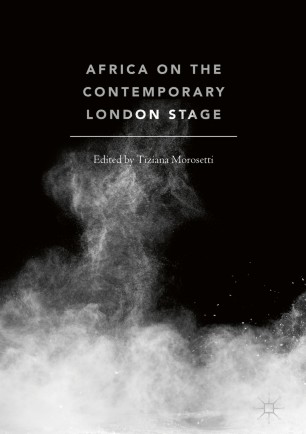 Africa on the Contemporary London Stage

This collection of essays investigates the way Africa has been portrayed on the London stage from the 1950s to the present. It focuses on whether — and, if so, to what extent — the Africa that emerges from the London scene is subject to stereotype, and/or in which ways the reception of audiences and critics have contributed to an understanding of the continent and its arts. The collection, divided into two parts, brings together well-established academics and emerging scholars, as well as playwrights, directors and performers currently active in London. With a focus on Wole Soyinka, Athol Fugard, Bola Agbaje, Biyi Bandele, and Dipo Agboluaje, amongst others, the volume examines the work of key companies such as Tiata Fahodzi and Talawa, as well as newer companies Two Gents, Iroko Theatre and Spora Stories. Interviews with Rotimi Babatunde, Ade Solanke and Dipo Agboluaje on the contemporary London scene are also included.

Tiziana Morosetti is a fixed-term affiliate with the African Studies Centre, Oxford, UK, where she teaches African Literature. She is deputy-director of the journal Quaderni del ’900, and the membership secretary of the African Theatre Association (AfTA). She is the editor of Staging the Other in Nineteenth-Century British Drama (2016).

“In Africa on the Contemporary London Stage, Tiziana Morosetti assembles a collection of essays from contributors spanning the broad range of expertise in the field of African theatre in the diaspora, its presence and the historical representation of Africans on the London stage. Each chapter is distinct in its focus, yet the book achieves a seamless cross-referencing and dialogue between the chapters that yields a clearer understanding of the subject. This is major contribution to the field of African theatre in general, and African diaspora theatre /Black British theatre in particular.” ( Professor Osita Okagbue, Goldsmiths, University of London, UK)

“Dr Tiziana Morosetti’s book is dynamic and evolutionary. It interrogates the egregious practices of Theatre critics who for almost a century have marginalized the presence of African drama on the British stage. They deemed it as irrelevant, unprofessional, sub-standard and unsuitable for British audience appreciation. This book painstakingly reveals what can best be described as deliberate attempts at a cultural hegemony, apartheid and the vicissitudes. The experience of African migrants from former British colonies as well as those of their descendants born in Britain have coalesced to define a definitive wave of British drama that is undeniably a fabric of the British experience which consequently, and unavoidably must be defined as British drama. With Morosetti’s book, it becomes impossible for any Theatre scholar writing about African or British drama to ignore this praxis and the evolution that has followed. ” (Professor ‘Niyi Coker, University of Missouri, USA)