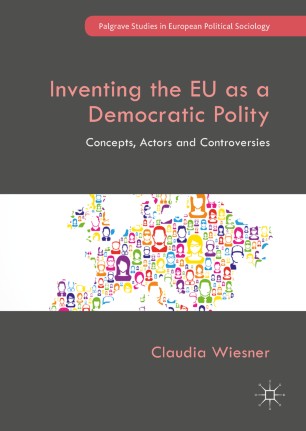 Inventing the EU as a Democratic Polity

The EU as a democratic polity has been invented: it is a product of creative and innovative actors and thinkers that conceptualized and by and by helped to realise it, from the beginning up to the present. But the concepts, ideas, and utopias of a democratic Europe differ considerably. The processes of inventing and building a democratic EU are marked by conceptual controversies in both public and academic debates. These are the resource for the present book, which focuses on the concepts, actors and controversies related to inventing the EU as a democratic polity. The chapters study exemplary long-term and detail cases related to inventing and institutionalizing the decisive elements of representative democracy in the EU—a parliament, citizens that vote for it in universal suffrage and governmental bodies that are linked to parliament in much the same way as government is in a parliamentary democracy.
Claudia Wiesner is Professor for Political science at Fulda University of Applied Sciences and adjunct Professor in Political Science at Jyväskylä University, Finland. Her main research interests lie in the comparative study of democracy, political culture and political sociology in the EU multilevel system. Wiesner´s second field of research is Public Policy, its evaluation, reform and theory.