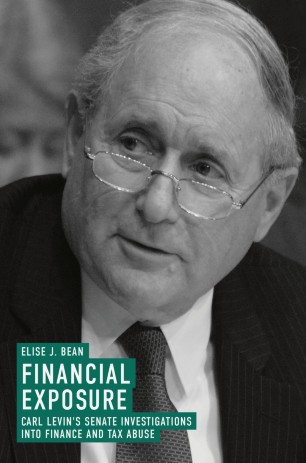 At a time when Congressional investigations have taken on added importance and urgency in American politics, this book offers readers a rare, insider’s portrait of the world of US Congressional oversight. It examines specific oversight investigations into multiple financial and offshore tax scandals over fifteen years, from 1999 to 2014, when Senator Levin served in a leadership role on the US Senate Permanent Subcommittee on Investigations (PSI), the Senate’s premier investigative body.
Despite mounting levels of partisanship, dysfunction, and cynicism swirling through Congress during those years, this book describes how Congressional oversight investigations can be a powerful tool for uncovering facts, building bipartisan consensus, and fostering change, offering detailed case histories as proof. Grounded in fact, and written as only an insider could tell it, this book will be of interest to financial and tax practitioners, policymakers, academics, students, and the general public.

For nearly 30 years beginning in 1985, Elise Bean worked as legal counsel to Senator Carl Levin (D-MI) on the US Senate Homeland Security and Governmental Affairs Committee. In 2003, Senator Levin appointed her his staff director and chief counsel on the Committee’s Permanent Subcommittee on Investigations. In early 2015, Senator Levin retired from the Senate, and so did Ms. Bean. She then helped establish in his honor the Levin Center at Wayne Law in Detroit.

Ms. Bean graduated Phi Beta Kappa from Wesleyan University, USA, in 1978, and received her law degree from the University of Michigan, USA, in 1982. She then served as a law clerk to the former Chief Judge of the US Claims Court, and worked for two years as a trial attorney with the US Department of Justice Civil Frauds Section.