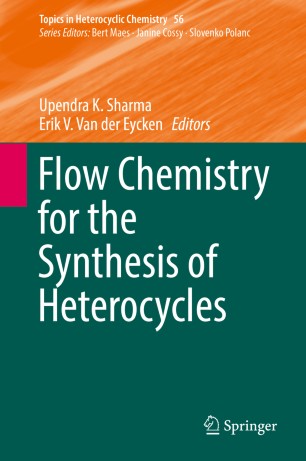 Flow Chemistry for the Synthesis of Heterocycles

This volume provides an overview of recent developments and scope in the use of flow chemistry in relevance to heterocyclic synthesis. The heterocyclic ring is the most prominent structural motif in the vast majority of natural products as well as pharmaceutical compounds since this facilitates tuneable interactions with the biological target besides conferring a degree of structural and metabolic stability. In recent times, flow chemistry has heralded a paradigm shift in organic synthesis as it offers several unique advantages over conventional methods like drastic acceleration of sluggish transformations, enhanced yields, cleaner reactions etc and is gradually gaining a lot of attention among organic chemist worldwide. Given the importance of heterocycles in natural products, medicinal chemistry and pharmaceuticals, this is a well warranted volume and complements the previous volume of Topics in Organometallic Chemistry ‘Organometallic Flow Chemistry’.

This volume offers a versatile overview of the topic, besides discussing the recent progress in the flourishing area of flow chemistry in relevance to heterocyclic chemistry; it will also help researchers to better understand the chemistry behind these reactions. This in turn provides a platform for future innovations towards the designing of novel transformations under continuous flow. Thus, this volume will appeal to both the novices in this field as well as to experts in academia and industry.

Upendra K. Sharma received his PhD degree (2011) in organic chemistry under the supervision of Dr. Arun K. Sinha at CSIR-Institute of Himalayan Bioresource Technology, Palampur, India. Thereafter, he worked as Assistant Professor (Chemistry) at National Institute of Technology (NIT), Jalandhar, India. Later on, he joined the research group of Prof. Erik Van der Eycken, University of Leuven, Belgium as postdoctoral fellow and till now has published more than 40 publications in reputed international journals. After short postdoctoral stints in the lab of Prof. Dr. Steven Ley (University of Cambridge) and Dr. Timothy Noël (University of Eindhoven), he is continuing in the lab of Prof. Van der Eycken as a senior postdoctoral research associate. His research interests include the development of new synthetic methods for biologically relevant molecules employing modern methods of synthesis viz. flow chemistry, photoredox catalysis and transition metal catalyzed C-H functionalizations.