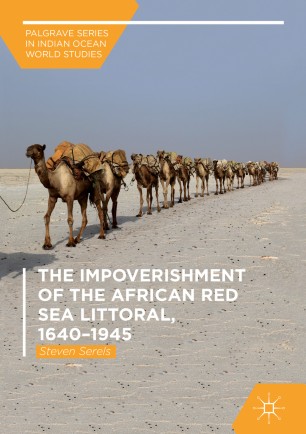 The Impoverishment of the African Red Sea Littoral, 1640–1945

The African Red Sea Littoral, currently divided between Sudan, Eritrea, Ethiopia, and Djibouti, is one of the poorest regions in the world. But the pastoralist communities indigenous to this region were not always poor—historically, they had access to a variety of resources that allowed them to prosper in the harsh, arid environment. This access was mediated by a robust moral economy of pastoralism that acted as a social safety net. Steven Serels charts the erosion of this moral economy, a slow-moving process that began during the Little Ice Age mega-drought of the seventeenth and eighteenth centuries and continued through the devastating famines of the twentieth century. By examining mass sedentarization after the Second World War as merely the latest manifestation of an inter-generational environmental and economic crisis, this book offers an innovative lens for understanding poverty in northeastern Africa.

“The geographical expanse and ethnic diversity of northeastern Africa and the adjoining Red Sea Littoral defy most scholarly efforts to produce a balanced historical account of the region’s pastoralist communities. This book overcomes these barriers to offer a masterful history of the development of poverty in these communities against the backdrop of environmental and socio-cultural change. For historians, anthropologists, and scholars of development studies and ethnic studies, this book will prove an invaluable resource.” (Martin S. Shanguhyia, Associate Professor of African History, Syracuse University, USA)
Buy options