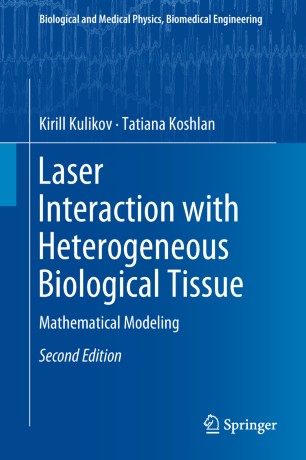 This book introduces readers to the principles of laser interaction with biological cells and tissues with varying degrees of organization. In addition to considering the problems of biomedical cell diagnostics, and modeling the scattering of laser irradiation of blood cells for biological structures (dermis, epidermis, vascular plexus), it presents an analytic theory based on solving the wave equation for the electromagnetic field. It discusses a range of mathematical modeling topics, including optical characterization of biological tissue with large-scale and small-scale inhomogeneities in the layers; heating blood vessels using laser irradiation on the outer surface of the skin; and thermo-chemical denaturation of biological structures based on the example of human skin.

In this second edition, a new electrodynamic model of the interaction of laser radiation with blood cells is presented for the structure of cells and the in vitro prediction of optical properties. The approach developed makes it possible to determine changes in cell size as well as modifications in their internal structures, such as transformation and polymorphism nucleus scattering, which is of interest for cytological studies. The new model is subsequently used to calculate the size distribution function of irregular-shape particles with a variety of forms and structures, which allows a cytological analysis of the observed deviations from normal cells.