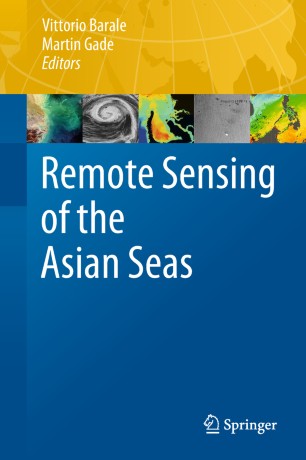 Remote Sensing of the Asian Seas

A wide variety of marginal basins, ranging from polar to equatorial regions, and a few sizeable enclosed basins, can all be included among the Asian Seas. The Arctic Ocean shelf seas off Siberia; the sheltered basins along the Pacific Ocean’s western rim; the coastal seas of the northernmost Indian Ocean, including the semi-enclosed Red Sea and Persian Gulf; the Caspian Sea, the remnants of the Aral Sea and a score of brackish or freshwater lakes, such as Lake Balkhash and Lake Baykal; all exhibit a multiplicity of environmental features and processes. Understanding the peculiarities of such a large and varied collection of marine and coastal types requires integrated observation systems, among which orbital remote sensing must play an essential role. This volume reviews the current potential of Earth Observations in assessing the many Asian seascapes, using both passive and active techniques in diverse spectral regions, such as measuring reflected visible and near-infrared sunlight and surface emissions in the thermal infrared and microwave range, or surface reflection of transmitted radar pulses in the microwave range. An in-depth evaluation of the available spectral regions and observation techniques, as well as of novel multi-technique methods, ensures that suitable tools are indeed accessible for exploring and managing the wealth of resources that the Asian Seas have to offer.
Vittorio Barale (right) graduated in Physics from the University of Milan in 1977, and then received his M.S., in 1982, and Ph.D., in 1986, from the University of California at San Diego while at the Scripps Institution of Oceanography. Since 1990 he has been with the Joint Research Centre of the European Commission. His research focuses on the ecological assessment of marginal and enclosed seas, and their coastal margins in particular, using optical remote sensing.
Martin Gade (left) received his first degree in Physics in 1992 and then his doctoral degree in Geosciences in 1996, both from the University of Hamburg, Germany. Since 1991 he has been with the Remote Sensing Unit of the Institute of Oceanography, at the University of Hamburg. His research focuses on air-sea interactions and coastal processes, and their remote sensing using active microwave techniques, as well as on laboratory and field experiments with marine surface films.