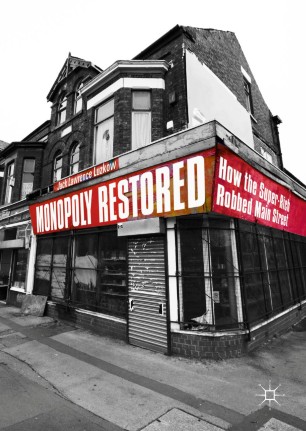 How the Super-Rich Robbed Main Street

This book is a work of contemporary economic history focusing primarily on the US and the UK. It shows that, historically, much of the wealth of the ultra-wealthy has been based on inheritance, tax evasion, political influence, or wage theft. Today, much of the wealth of the rentier class—the super-rich—is based on income from ownership or control of scarce assets, or assets artificially made scarce. As a result, the super-rich reap much of their wealth from patents, monopolies, and subsidies. Their banks retain the right to speculate on risky derivatives, and their credit-card companies are not limited by usury laws that reduce interest rates. The super-rich have lowered (or escaped) inheritance taxes, shifted much of their income to lower taxed capital gains, practiced wage theft, fought minimum wage laws, outsourced jobs, and resorted to temps and contract labor to avoid unions and decent wages. They use tax havens where trillions of dollars remain untaxed, transfer profits of their intellectual and financial property to subsidiaries in low-tax regimes, and defend for-profit health insurance that is unaffordable and inequitable for millions. This book states in qualitative and quantitative terms how expensive the super-rich have become, why they are unsustainable for the rest of us, and what the way forward to greater economic equality may be. In sum, the super-rich are unaffordable.

Jack Lawrence Luzkow is Professor of History at Fontbonne University, USA. His previously published works include The Great Forgetting: The Past, Present, and Future of Social Democracy and the Welfare State; What’s Left: Marxism, Utopianism, and the Revolt against History; and The Revenge of History: Why the Past Endures, A Critique of Francis Fukuyama.

“Jack Luzkow’s meticulous roadmap shows that the power of the few plutocrats over the many citizens produces unmerited wealth that mostly belongs to the people.  That’s enough to motivate taking it back for mass well-being and civic self-respect.” (Ralph Nader, Center for Study of Responsive Law, USA)

“A masterly account of how the United States has become the rentier economy above all others on earth; how the UK follows suit in Europe; who suffers as a result; and what can (and very probably soon will) be done to remedy this.” (Danny Dorling, University of Oxford, UK)

“Luzkow documents why monopolists’ relentless assault on democracy and the rule of law is essential to their ability to loot the world with impunity, and he goes on to show how to fight back against the elite frauds.” (William  K. Black, University of Missouri-Kansas City, USA)