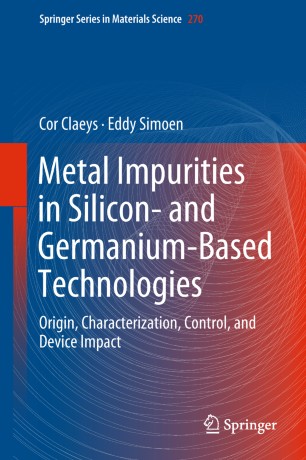 This book gives a unique review of different aspects of metallic contaminations in Si and Ge-based semiconductors. All important metals are discussed including their origin during crystal and/or device manufacturing, their fundamental properties, their characterization techniques and their impact on the electrical device performance. Several control and possible gettering approaches are addressed.
The book is a reference for researchers and engineers studying advanced and state-of-the-art micro- and nano-electronic semiconductor devices and circuits. It has an interdisciplinary nature by combining different disciplines such as material science, defect engineering, device processing, defect and device characterization and device physics and engineering.

Cor Claeys is a Professor at the KU Leuven (Belgium) since 1990. He was at imec, Leuven, Belgium from 1984 till 2016. His main interests are silicon technology, device physics, low-frequency noise phenomena, radiation effects, defect engineering and material characterization. He has co-edited a book on “Low Temperature Electronics” and “Germanium-Based Technologies: From Materials to Devices” and co-authored monographs on “Radiation Effects in Advanced Semiconductor Materials and Devices,” “Fundamental and Technological Aspects of Extended Defects in Germanium” and “Random Telegraph Signals in Semiconductor Devices.” He (co)authored 15 book chapters, over 1100 conference presentations and more than 1300 technical papers. He is editor/co-editor of 60 Conference Proceedings. Prof. Claeys is a Fellow of the Electrochemical Society and of the IEEE. He was Founder of the IEEE Electron Devices Benelux Chapter, Chair of the IEEE Benelux Section, elected Board of Governors  Member of the Electron Devices Society and the EDS Vice President for Chapters and Regions. He was EDS President in 2008-2009 and Division Director on the IEEE Board of Directors in 2012-2013. He is a recipient of the IEEE Third Millennium Medal and received the IEEE EDS Distinguished Service Award.
Within the Electrochemical Society, he was the Chair of the Electronics & Photonics Division from 2001 to 2003. In 2004, he received the Electronics and Photonics Division Award. In 2016 he received the Semi China Special Recognition Award  for outstanding involvement in the China Semiconductor Technology International Conference (CSTIC).
Eddy Simoen obtained his Bachelor’s (1976–1978) and Master’s degrees in Physics Engineering (1978–1980), as well as his Ph.D. in Engineering (1985), from Ghent University (Belgium). He is currently a Specialist at imec (Leuven, Belgium), involved in the study of defect and strain engineering in high-mobility and epitaxial substrates and defect studies in germanium and III–V compounds (AlN; GaN, InP, etc). Another current focus point is the study of 1-transistor memories based on bulk FinFET and Ultra-thin Buried Oxide (UTBOX) Silicon-on-Insulator (SOI), using low-frequency noise. In 2013, he was appointed a part-time Professor at Ghent University. He is a member of the IEEE and ECS and became an ECS Fellow in 2016.
In these fields, he has (co-) authored over 1500 Journal and Conference papers, 12 book chapters and a monograph on Radiation Effects in Advanced Semiconductor Devices and Materials (Springer, 2002). He was also a co-editor of the book on Germanium-based Technologies – from Materials to Devices (Elsevier March 2007; Chinese translation 2010). Another book on the “Fundamental and Technological Aspects of Extended Defects in Germanium” was published by Springer in January 2009. In 2016 he published “Random Telegraph Signals in Semiconductor Devices” with IOP. He is also a co-inventor of two patents.