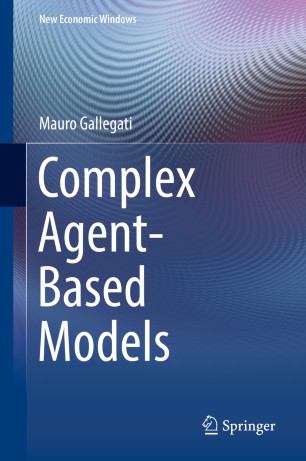 This book offers a thorough introduction to the highly promising complex agent-based approach to economics, in which agent-based models (ABMs) are used to represent economic systems as complex and evolving systems composed of heterogeneous agents of limited rationality who interact with each other, generating the system’s emergent properties in the process.

This approach represents a response to the limitations of the dominant theory in economics, which does not consider the possibility of a major crisis, and to the inability of dynamic stochastic general equilibrium theory to generate empirically falsifiable propositions. In the new perspective, the focus is on identifying the elements of instability rather than the triggering event. As the theory of complexity demonstrates, the interactions of heterogeneous agents produce non-linearity: this puts an end to the age of certainties.

With ABMs, the methodology is “from the bottom up”. The individual parameters and their distribution are estimated, and then evaluated to verify whether aggregate regularities emerge on the whole. In short, not only micro, but also meso and macro empirical validation are employed. Moreover, it shows that the mantra of growth should be supplanted by the concept of a growth​.
Given its depth of coverage, the book will enable students at the undergraduate and Master’s level to gain a firm grasp of this important emerging approach.

“This book is flower blossomed by one of the two greatest Italian economists.”

“The author’s - the ABM prophet’s - thoughts on economics have been at the forefront of the world. Without a firm belief in and dedication to human society, it is impossible to write such a book. This is a work of high academic value, which can help readers quickly understand the history and current situation of complex economic theory. In particular, we can understand the basic viewpoints, academic status, advantages and shortcomings of various schools of economic theory.”

Mauro Gallegati is Professor of Economics at the Polytechnic University of Marche, Ancona, Italy. His research areas include business fluctuations, nonlinear dynamics, models of financial fragility, and heterogeneous interacting agents. He has published books and many papers in leading journals in the fields of economics, economic history and history of economic analysis, nonlinear mathematics, applied economics, complexity, and econophysics. He has been involved in a number of international research projects.