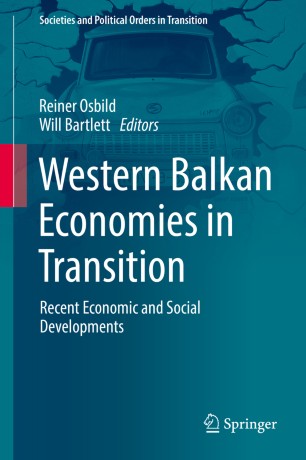 This book explores the economic and social development of the Western Balkan region, a group of six countries that are potential candidates for EU membership. It focuses on the key economic issues facing these countries, including the challenge of promoting economic growth, limiting public deficits and debt, and fostering international trade relations. Given the severe impact of the recent economic crisis on social welfare in the region, it also investigates the nature and extent of social exclusion, a factor likely to produce future political instabilities if not effectively addressed by a return to sustainable economic growth. The contributions explore these issues in light of the major influence of EU policy instruments and advice, which are currently guiding the economies along an accession trajectory to future EU membership.

Reiner Osbild is professor for economics at the University of Applied Sciences (Hochschule) Emden-Leer in northern Germany. He was born in 1962, graduated in 1988 at the University of Trier (Germany) and wrote the Ph.D. thesis over the state’s influence on labour markets (1993). During the first 12 years of his professional life he worked with leading German banks, mainly in the fields of macro research, investment banking support, and equity research. In 2004, he was awarded as the best European equity analyst for Benelux Financial Service Companies. From 2010-2011, Reiner taught Macro Finance at the University of Finance and Economics (DUFE) in Dalian, China. From there he moved to the private university SRH Heidelberg (2012-2014). As to his research, he focused on labour markets in early life, but in recent years, he turned his attention to the Euro Crisis. He wrote the book Finanzkrise – Geld, Gier und Gerechtigkeit (2014) (Financial Crisis – Money, Greediness, Fairness). Thereafter, he wrote several articles in „Wirtschaftswoche online“, the online edition of the leading journal for business and economics in Germany.

Will Bartlett was Senior Research Fellow at the European Institute of the London School of Economics and Political Science from 2009 to 2016, where he is now Senior Visiting Fellow at the “LSEE – Research on South East Europe” research unit. He graduated from the University of Cambridge in 1971 with a Bachelor degree in Economics, and gained a Master degree in Development Economics from the School for Oriental and African Studies (SOAS) at London University in 1972. He completed his PhD at the University of Liverpool in 1978 on the topic of “Economic Development, Institutional Reform, and Unemployment in Yugoslavia”. He has taught development economics, comparative economic systems and the economics of European enlargement at the universities of Southampton, Bath, Bristol, and the LSE. From 1983-1986 he was Research Fellow at the European University Institute, Florence, Italy. He has served as Deputy Director of the Centre for Mediterranean Studies, University of Bristol (1989 – 1999), and President of the European Association for Comparative Economic Studies (2000-2002). Since 2011 he has been Coordinator of the LSEE Research Network on Social Cohesion in South East Europe. He has written numerous articles in refereed journals and his book “Europe’s Troubled Region: Economic Development, Institutional Reform and Social Welfare in the Western Balkans”, was published by Routledge in 2008. He has carried out policy research and consultancy on the Western Balkans for the European Commission, the Council of Europe, the European Training Foundation, the UNDP, UNICEF and other international organisations.