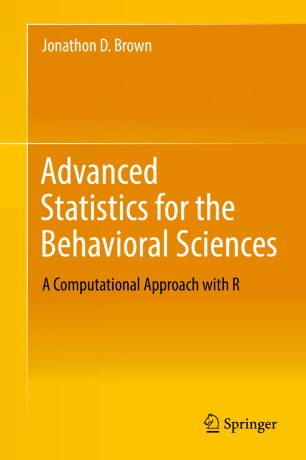 Advanced Statistics for the Behavioral Sciences

A Computational Approach with R

This book demonstrates the importance of computer-generated statistical analyses in behavioral science research, particularly those using the R software environment. Statistical methods are being increasingly developed and refined by computer scientists, with expertise in writing efficient and elegant computer code.  Unfortunately, many researchers lack this programming background, leaving them to accept on faith the black-box output that emerges from the sophisticated statistical models they frequently use.
Building on the author’s previous volume, Linear Models in Matrix Form, this text bridges the gap between computer science and research application, providing easy-to-follow computer code for many statistical analyses using the R software environment. The text opens with a foundational section on linear algebra, then covers a variety of advanced topics, including robust regression,  model selection based on bias and efficiency, nonlinear models and optimization routines, generalized linear models, and survival and time-series analysis.  Each section concludes with a presentation of the computer code used to illuminate the analysis, as well as pointers to packages in R that can be used for similar analyses and nonstandard cases.  The accessible code and breadth of topics make this book an ideal tool for graduate students or researchers in the behavioral sciences who are interested in performing advanced statistical analyses without having a sophisticated background in computer science and mathematics.
Jonathon D. Brown is a social psychologist at the University of Washington. Since receiving his Ph.D. from UCLA in 1986, he has written three books, authored more than 75 journal articles and chapters, received a Presidential Young Investigator Award from the National Science Foundation, and been recognized as one of social psychology's most frequently-cited authors.