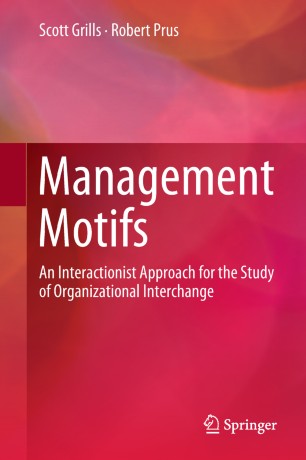 An Interactionist Approach for the Study of Organizational Interchange

Scott Grills, Professor, is a sociologist at Brandon University, Brandon, Manitoba, Canada. His research attends to generic social processes from a symbolic interactionist perspective. His published research has included work in the substantive areas of administration, deviance, education, health and illness, music, political life, and research methods. He has held management positions in multiple settings including faculty associations (at the local and provincial level), the performing arts, academic associations and university administration (at decanal and vice-presidential levels). He has served as the president of four organizations, including the Society for the Study of Symbolic Interaction.

Robert Prus, Professor Emeritus, is a sociologist at the University of Waterloo, Waterloo, Ontario, Canada. A symbolic interactionist, ethnographer, and social theorist, he has been examining the conceptual and methodological connections of American pragmatist philosophy and its sociological offshoot, symbolic interactionism, with classical Greek, Latin, and interim scholarship. As part of this larger project, he has been analyzing some of Emile Durkheim’s lesser known texts (on morality, education, religion, and philosophy) mindfully of their pragmatist affinities with symbolic interactionist scholarship and Aristotle’s foundational emphasis on the nature of human knowing, acting, and community-based interchange.