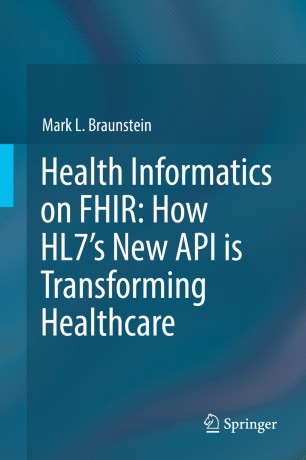 This textbook begins with an introduction to the US healthcare delivery system, its many systemic challenges and the prior efforts to develop and deploy informatics tools to help overcome those problems. It goes on to discuss health informatics from an historical perspective, its current state and its likely future state now that electronic health record systems are widely deployed, the HL7 Fast Healthcare Interoperability standard is being rapidly accepted as the means to access the data stored in those systems and analytics is increasing being used to gain new knowledge from that aggregated clinical data.  It then turns to some of the important and evolving areas of informatics including population and public health, mHealth and big data and analytics.  Use cases and case studies are used in all of these discussions to help readers connect the technologies to real world challenges.

Effective use of informatics systems and tools by providers and their patients is key to improving the quality, safety and cost of healthcare.  With health records now digital, no effective means has existed for sharing them with patients, among the multiple providers who may care for them and for important secondary uses such as public/population health and research.  This problem is a topic of congressional discussion and is addressed by the 21st Century Cures Act of 2016 that mandates that electronic health record (EHR) systems offer a patient-facing API.

HL7’s Fast Healthcare Interoperability Resources (FHIR) is that API and this is the first comprehensive treatment of the technology and the many ways it is already being used.  FHIR is based on web technologies and is thus a far more facile, easy to implement approach that is rapidly gaining acceptance. It is also the basis for a ‘universal health app platform’ that literally has the potential to foster innovation around the data in patient records similar to the app ecosystems smartphones created around the data they store.  FHIR app stores have already been opened by Epic and Cerner, the two largest enterprise EHR vendors.

Provider facing apps are already being explored to improve EHR usability and support personalized medicine. Medicare and the Veteran’s Administration have announced FHIR app platforms for their patients.  Apple’s new IOS 11.3 features the ability for consumers to aggregate their health records on their iPhone using FHIR. Health insurance companies are exploring applications of FHIR to improve service and communication with their providers and patients. SureScripts, the national e-Prescribing network, is using FHIR to help doctors know if their patients are complying with prescriptions.

This textbook is for introductory health informatics courses for computer science and health sciences students (e.g. doctors, nurses, PhDs), the current health informatics community, IT professionals interested in learning about the field and practicing healthcare providers.  Though this textbook covers an important new technology, it is accessible to non-technical readers including healthcare providers, their patients or anyone interested in the use of healthcare data for improved care, public/population health or research.

Mark Braunstein, MD, an author and thought-leader in the field, teaches health informatics in the School of Interactive Computing of the College of Computing at the Georgia Institute of Technology.  After a successful career as a health IT entrepreneur, he joined Georgia Tech in 2007 as a Professor of the Practice.  He developed the first Massive Open Online Course (MOOC) in the field and his unique health informatics graduate seminar was the first to be centered on HL7’s Fast Healthcare Interoperability Resource (FHIR) standard.  In it, student teams work with domain experts to solve problems that often involve analytics.
He will be a visiting professor at the University of Queensland in Brisbane, Australia the second half of this year to create a similar educational program there.  Previously he wrote Practitioner’s Guide to Health Informatics (Springer 2015) and Contemporary Health Informatics (AMIA 2014).
Dr. Braunstein is actively involved with HL7’s development of the Fast Healthcare Interoperability Resource (FHIR) standard and in efforts at the CDC to use FHIR as a ‘universal platform’ for public health surveillance.  He is also collaborating with Open mHealth to bring their schema for representing data from patient operated apps and devices into the FHIR standard.
He earned a BS from MIT in 1969, an MD from the Medical University of South Carolina in 1974 and served as a resident at Washington University.
He was a 1996 Entrepreneur of the Year Award for the Southeast Region, received a 1995 Innovation in Medical Management Award from the American Society of Physician Executives and received the 2006 Founder’s Award from the American-Israel Chamber of Commerce, Southeast Region.  In 2013 he was honored as a Distinguished Alumnus by MUSC’s College of Medicine.

“Dr. Mark Braunstein's latest book is a "must read" for any serious student of biomedical informatics. It is an essential foundation text suitable for an introductory course. Dr. Braunstein doesn't just talk about a technical standard; he talks about why standards are so essential in to a field heavily focused on data science. Dr. Braunstein places technology in the context of the broader healthcare system, contemporary challenges, and important historical developments in the field.   Taking a "real world" approach, Braunstein gives clinical readers an appreciation of technology and gives technical readers an understanding of the importance of their work. The book is an easy read; clinicians and administrators can quickly gain a deeper technical understanding of vital technology issues. This is an essential read for any student or teacher in the field.” (Mark Frisse, MD, Vanderbilt University Medical Center, Nashville, USA)

“This is a great book – lots of history to put things in perspective, lots of high-level examples to show how FHIR fits into all this and lots of examples of what is under the hood to make it all work.  As I start to develop applications in the FHIR environment, this book well be a very valuable tutorial to help me get started.” (James Cimino, MD, University of Alabama at Birmingham, USA)