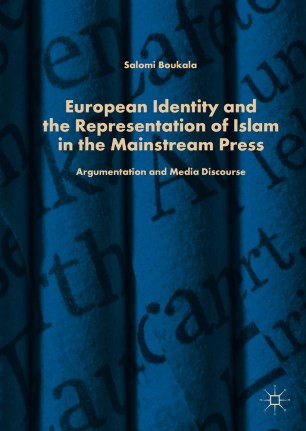 European Identity and the Representation of Islam in the Mainstream Press

‘This excellent book presents a critical examination of how British, French and Greek media outlets report a notion of European identity that stands in opposition to (and in conflict with) Muslim identity. Highly recommended reading for anyone interested in the politics of identity, migration and the mass media.’
—John E Richardson, Reader in Critical Discourse Studies, Loughborough University, UK
‘Drawing on a rich set of examples, Salomi Boukala offers an interdisciplinary perspective on how mainstream media contribute to the discursive construction of the supranational European identity and creates an innovative new space for the on-going discussion regarding the European “Self” and the “Other”.’
—Maria Sifianou, Professor Emerita, National and Kapodistrian University of Athens, Greece
‘Dr Boukala’s book presents a fresh, interdisciplinary and insightful understanding of the ways immigration and Islam(ism) are interwoven in the contemporary social psyche of European identity discourses as represented in mass media in different European geopolitics. Boukala’s expertise in navigating through several theoretical fronts while delivering extensive first-hand data analyses is refreshing and commendable.’
—Majid KhosraviNik, Senior Lecturer in Digital Media & Discourse Studies, Newcastle University, UK
This book combines media studies and linguistics with theories of national and supranational identity to offer an interdisciplinary approach to the study of European identity/ies and news discourses. Taking representations of ‘Islamist terrorism’ and Turkey’s accession to the European Union as case studies, it analyses the discursive construction of supranational European identity through the discursive distinction of ‘Us’ and ‘Them’. Moreover, it compares the media’s representations of the ‘Other’ in different socio-political moments in Europe- from times of European integration (2004-5) to the European dystopia (2015-16) through the discourse analysis of specific Greek, British and French newspapers. This timely work synthesizes classic argumentative approaches and Gramscian thought in the study of media discourses by focusing on the Aristotelian concept of topos and introducing the concept of ‘hegemonic knowledge’. This pioneering work will appeal to scholars across the fields of linguistics, social anthropology, European politics, and media studies.
Salomi Boukala is Adjunct Lecturer at Panteion University, Greece