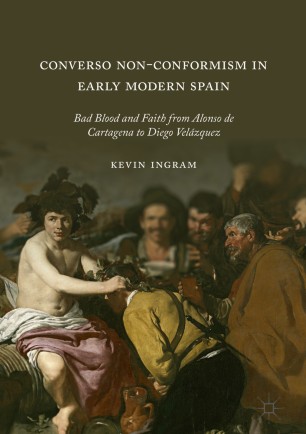 This book examines the effects of Jewish conversions to Christianity in late medieval Spanish society. Ingram focuses on these converts and their descendants (known as conversos) not as Judaizers, but as Christian humanists, mystics and evangelists, who attempt to create a new society based on quietist religious practice, merit, and toleration. His narrative takes the reader on a journey from the late fourteenth-century conversions and the first blood purity laws (designed to marginalize conversos), through the early sixteenth-century Erasmian and radical mystical movements, to a Counter-Reformation environment in which conversos become the advocates for pacifism and concordance. His account ends at the court of Philip IV, where growing intolerance towards Madrid’s converso courtiers is subtly attacked by Spain’s greatest painter, Diego Velázquez, in his work, Los Borrachos. Finally, Ingram examines the historiography of early modern Spain, in which he argues the converso reform phenomenon continues to be underexplored.

“Converso Non-Conformism in Early Modern Spain: Bad Blood and Faith … sets out to account for the experience of those Spanish Jews, perhaps one-third of the total Spanish Jewish population, who converted to Catholicism after the Reconquista. … An outstanding study of its subject, Converso Non-Conformism in Early Modern Spain looks to be advancing an agenda setting argument.” (Crawford Gribben, New Books network, newbooksnetwork.com, February 07, 2019)