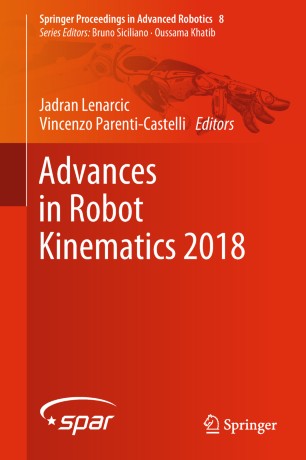 This is the proceedings of ARK 2018, the 16th International Symposium on Advances in Robot Kinematics, that was organized by the Group of Robotics, Automation and Biomechanics (GRAB) from the University of Bologna, Italy.
ARK are international symposia of the highest level organized every two years since 1988. ARK provides a forum for researchers working in robot kinematics and stimulates new directions of research by forging links between robot kinematics and other areas.
The main topics of the symposium of 2018 were: kinematic analysis of robots, robot modeling and simulation, kinematic design of robots, kinematics in robot control, theories and methods in kinematics, singularity analysis, kinematic problems in parallel robots, redundant robots, cable robots, over-constrained linkages, kinematics in biological systems, humanoid robots and humanoid subsystems.