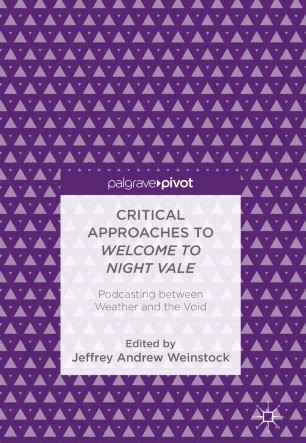 Podcasting between Weather and the Void

With well over one-hundred episodes, the podcast Welcome to Night Vale has spawned several international live tours, two novels set in the Night Vale universe, and an extensive volume of fan fiction and commentary. However, despite its immense popularity, Welcome to Night Vale has received almost no academic scrutiny. This edited collection of scholarly essays—the very first of its kind on a podcast—attempts to redress this lack of attention to Night Vale by bringing together an international group of scholars from different disciplines to consider the program’s form, themes, politics, and fanbase. After a thorough introduction by the volume’s editor, Jeffrey Andrew Weinstock, the eight contributors not only offer close analysis of Night Vale, but use the program as the impetus for broader explorations of new media, gender, the constitution of identity, the construction of place, and the human relationship to meaning and the non-human.

Jeffrey Andrew Weinstock is Professor of English at Central Michigan University, USA, and an associate editor for The Journal of the Fantastic in the Arts.  He is the author or editor of twenty books, the most recent of which are The Cambridge Companion to the American Gothic, The Age of Lovecraft (with Carl Sederholm), Goth Music: From Sound to Subculture (with Isabella van Elferen), and Return to Twin Peaks: New Approaches to Materiality, Theory, and Genre on Television (with Catherine Spooner). Visit him at JeffreyAndrewWeinstock.com.