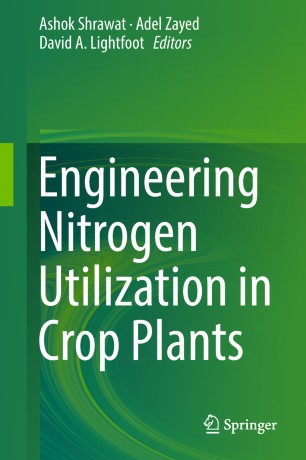 This book discusses and addresses the rapidly increasing world population demand for food, which is expected to double by 2050. To meet these demands farmers will need to improve crop productivity, which relies heavily on nitrogen (N) fertilization. Production of N fertilizers, however, consumes huge amounts of energy and the loss of excess N fertilizers to leaching results in the pollution of waterways and oceans. Therefore, increasing plant nitrogen use efficiency (NUE) is essential to help farmers produce more while conserving the environment. This book assembles some of the best work of top researchers from academic and industrial institutions in the area of NUE and provides valuable insight to scholars and researchers by its comprehensive discussion of current and future strategies to improve NUE through genetic manipulation. This book should also be highly valuable to policy makers, environmentalists, farmers, biotechnology executives, and to the hard-core researchers working in the lab.

Ashok Shrawat is currently working as a scientist in the Plant Biotechnology division of Monsanto Company where his focus is on the development and application of genome editing and transgenic science technologies in crop plants. He has conducted research for more than 20 years in the field of plant biotechnology including engineering nitrogen use efficiency in crop plants. He has published more than seventy research papers in international journals and has three patented inventions. In addition, he has received several prestigious international fellowships, including the Alexander von Humboldt Fellowship of Germany and Alberta Ingenuity Industrial Research Fellowship of Canada.
David A. Lightfoot is a Professor of Genetics, Biotechnology and Genomics. I have conducted Research for 30 years and have received 3 grants from the NSF, 2 grants from the USDA, 6 grants from the United Soybean Board, 1 grant from the Frasch Foundation, 10 grants from the Illinois Soybean Board, 4 grants from the Illinois Corn Board and 4 grants from the Council for Agricultural Research. I have written 185 peer reviewed articles including Science, Nature Plants and PNAS. I have patented 7 inventions. I am section editor for BMC Genomics and associate editor for the Theoretical and Applied Genetics and Journal of Biotechnology and Biomedicine.
Adel Zayed received his Ph.D. (1987) in Horticulture from the University of London, England and his B.S. (1976) and M.Sc. (1982) in Cotton Sciences from the University of Alexandria, Egypt. He served as an Assistant Professor at the Department of Plant Production, College of Agriculture, University of Alexandria for three years before he joined the University of California, Berkeley initially as a postdoctoral researcher and later as a Research Assistant Physiologist/Biochemist for several years. From 1989 to 1999, his research at UC Berkeley centered on photosynthesis, plant nutrition, and phytoremediation of toxic trace elements. He joined Paradigm Genetics in November 1999 to lead the Plant Physiology Group and developed high throughput physiology stress screens to study gene function in plants using Arabidopsis as a model plant. In May 2005, Adel joined Monsanto as part of the Monsanto acquisition of Icoria (formerly Paradigm Genetics) and transitioned into a new role as the Research Triangle Park (RTP) Site Nitrogen Utilization Team Lead. Subsequently, he held several positions at Monsanto with increasing responsibilities including RTP Corn Physiology Lead, Automated Greenhouse Physiology Lead, RTP Crop Physiology Lead, Biotech Wheat Yield Project Lead, and Biotech Soybean Yield Project Lead. Currently Adel is the Global Quality Technology Development and Optimization Lead within the Monsanto Supply Chain Division. Adel was elected to the Monsanto Science Fellow Program in 1999 as an Associate Fellow and was promoted to Science Fellow in 2005. Adel has more than 30 peer reviewed publications, 9 book chapters, 4 issued US patents, 20 published US patent applications and 24 published international patent applications.