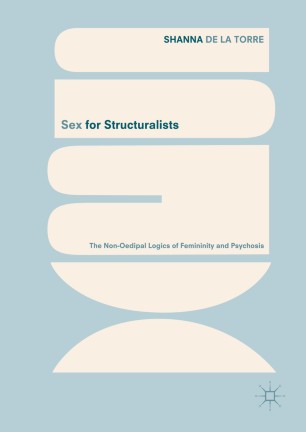 The Non-Oedipal Logics of Femininity and Psychosis

This book argues that structuralism makes itself useful when it engages with the non-Oedipal logics of femininity and psychosis. Building from the psychoanalytic belief that norms repress unconscious desire while structures open onto the creative resources of the symbolic, Sex for Structuralists looks to key texts in myth, trauma, and unconscious fantasy by Sigmund Freud, Jacques Lacan, and Claude Lévi-Strauss. It also examines innovative writings by contemporary Lacanian thinkers in order to discover what becomes of structuralism when the ground upon which it ostensibly stands (namely, that of the zero symbol or the incest prohibition) drops out from under it.

Shanna de la Torre is a social worker in practice in Minnesota, USA. She received her MSW from the University of Minnesota and her PhD in Romance Studies from Cornell University, USA. Her writings have appeared in differences: A Feminist Journal of Cultural Studies, International Journal of Psychoanalysis, Transgender Studies Reader, Volume 2, and TSQ: Transgender Studies Quarterly.