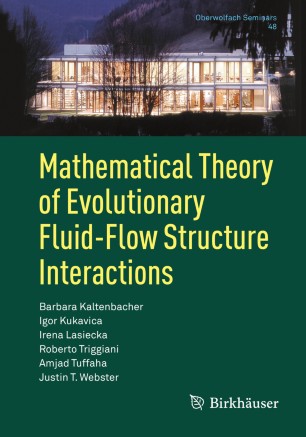 This book is devoted to the study of coupled partial differential equation models, which describe complex dynamical systems occurring in modern scientific applications such as fluid/flow-structure interactions. The first chapter provides a general description of a fluid-structure interaction, which is formulated within a realistic framework, where the structure subject to a frictional damping moves within the fluid. The second chapter then offers a multifaceted description, with often surprising results, of the case of the static interface; a case that is argued in the literature to be a good model for small, rapid oscillations of the structure. The third chapter describes flow-structure interaction where the compressible Navier-Stokes equations are replaced by the linearized Euler equation, while the solid is taken as a nonlinear plate, which oscillates in the surrounding gas flow. The final chapter focuses on a the equations of nonlinear acoustics coupled with linear acoustics or elasticity, as they arise in the context of high intensity ultrasound applications.