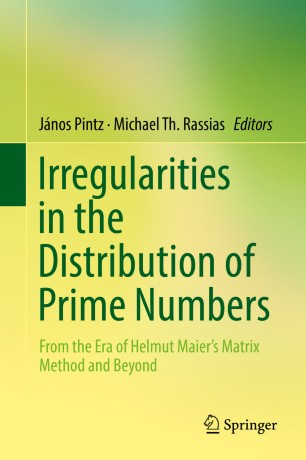 Irregularities in the Distribution of Prime Numbers

From the Era of Helmut Maier's Matrix Method and Beyond

This volume presents research and expository papers highlighting the vibrant and fascinating study of irregularities in the distribution of primes. Written by an international group of experts, contributions present a self-contained yet unified exploration of a rapidly progressing area. Emphasis is given to the research inspired by Maier’s matrix method, which established a newfound understanding of the distribution of primes. Additionally, the book provides an historical overview of a large body of research in analytic number theory and approximation theory. The papers published within are intended as reference tools for graduate students and researchers in mathematics.

János Pintz is a Hungarian mathematician working in analytic number theory. He is a fellow of the Rényi Mathematical Institute and is also a member of the Hungarian Academy of Sciences. In 2014, he received the Cole Prize.
Michael Th. Rassias is a Latsis Foundation Senior Fellow at the University of Zürich and a visiting researcher at the Institute for Advanced Study, Princeton. He has also been a researcher at ETH-Zürich and Princeton University. While at Princeton, he collaborated with John F. Nash, Jr., for the Springer volume Open Problems in Mathematics.