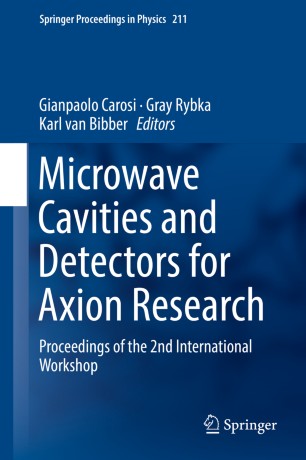 Proceedings of the 2nd International Workshop

The nature of dark matter remains one of the preeminent mysteries in physics and cosmology. It appears to require the existence of new particles whose interactions to ordinary matter are extraordinarily feeble. One well-motivated candidate is the axion, an extraordinarily light neutral particle that may possibly be detected by looking for their conversion to detectable microwaves in the presence of a strong magnetic field. This has led to a number of experimental searches that are beginning to probe plausible axion model space and may discover the axion in the near future.
These proceedings discuss the challenges of designing and operating tunable resonant cavities and detectors at ultralow temperatures. The topics discussed here have potential application far beyond the field of dark matter detection and may be applied to resonant cavities for accelerators as well as designing superconducting detectors for quantum information and computing applications. This work is intended for graduate students and researchers interested in learning the unique requirements for designing and operating microwave cavities and detectors for direct axion searches and to introduce several proposed experimental concepts that are still in the prototype stage.

Dr. Gianpaolo Carosi is a staff scientist at Lawrence Livermore National Laboratory (LLNL) with a primary research focus in direct dark matter axion searches and quantum detector development. Dr. Carosi obtained his Bachelors in Physics from Harvey Mudd College (2000) and a Ph.D in Physics from the Massachusetts Institute of Technology (2006). His thesis focused on indirect dark matter searches with the AMS Cosmic Ray experiment, currently sited on the International Space Station. Dr. Carosi worked as a postdoctoral researcher on the Axion Dark Matter Experiment (ADMX) at LLNL starting in 2006 and transitioned to staff in 2009. He is currently Co-spokesman of the ADMX experiment, now a DOE Office of Science “Generation 2” Dark Matter Project. He is a DOE Early Career Research Award recipient (2012-2017) with a focus on Microwave Cavity development for dark matter axion searches. He has led the organization of both the current workshop outlined in this proceedings proposal and the previous workshop (last held at LLNL in Aug 2015). In addition to his work on axion research, he is involved in research on superconducting quantum sensors and has worked in the past on national security applications involving fast neutron detection and gamma-ray imaging.

Dr. Rybka Gray is an assistant professor at the University of Washington Department of Physics.  He received his BS from Caltech in 2002 and his PhD in experimental particle physics from MIT in 2007.  He is co-spokesperson for the ADMX experiment, now a DOE Office of Science “Generation 2” Dark Matter Project.  He co-organized the workshop outlined in the proceedings.  In addition to axion dark matter, Dr. Rybka played a key role in the development of Cyclotron Radiation Emission Spectroscopy (CRES) and is working actively on the Project 8 experiment to measure the neutrino mass scale.

Dr. Karl van Bibber received his BS and PhD from MIT in experimental nuclear physics.  After postdoctoral work at LBNL, he served as an Assistant Professor of Physics at Stanford.  He joined LLNL where he founded and led the High Energy Physics and Accelerator Technology Group, and was LLNL Project Leader for construction of the SLAC-LBNL-LLNL PEP-II B Factory project.  His institutional service includes positions as Chief Scientist for the Physics and Space Technology directorate, and Deputy Director of the Laboratory Science and Technology Office.  In 2009 he became Vice President and Dean of Research of the Naval Postgraduate School in Monterey, CA.  In 2012 he joined the faculty of UC Berkeley as Professor of Nuclear Engineering, and acceded to Department Chair in July 2012, serving also as Executive Director of the Nuclear Science and Security Consortium, a DOE Office of Non-Proliferation center-of-excellence.  In July 2017, he was appointed Associate Dean for Research in the College of Engineering.  His research focuses on basic and applied nuclear science, particle astrophysics, and accelerator science and technology.  He is the recipient of an Alfred P. Sloan Research Fellowship, the DOE Deputy Secretary Award for the SLAC-LBNL-LLNL PEP-II B Factory accelerator, and the Navy Superior Civilian Service Award for the establishment of degree and executive education programs in Energy, the first within the DoD.  He is a fellow of the APS and AAAS.