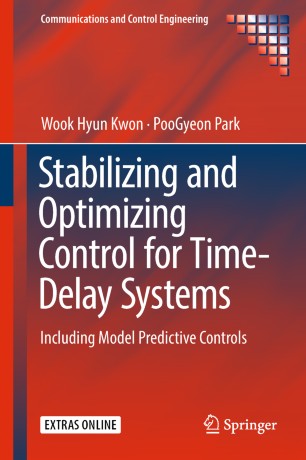 Stabilizing and Optimizing Control for Time-Delay Systems introduces three important classes of stabilizing controls for time-delay systems: non-optimal (without performance criteria); suboptimal (including guaranteed costs); and optimal controls. Each class is treated in detail and compared in terms of prior control structures. State- and input-delayed systems are considered. The book provides a unified mathematical framework with common notation being used throughout.

Receding-horizon, or model predictive, linear quadratic (LQ), linear-quadratic-Gaussian and H∞ controls for time-delay systems are chosen as optimal stabilizing controls. Cost monotonicity is investigated in order to guarantee the asymptotic stability of closed-loop systems operating with such controls.

The authors use guaranteed LQ and H∞ controls as representative sub-optimal methods; these are obtained with pre-determined control structures and certain upper bounds of performance criteria. Non-optimal stabilizing controls are obtained with predetermined control structures but with no performance criteria. Recently developed inequalities are exploited to obtain less conservative results.

To facilitate computation, the authors use linear matrix inequalities to represent gain matrices for non-optimal and sub-optimal stabilizing controls, and all the initial conditions of coupled differential Riccati equations of optimal stabilizing controls. Numerical examples are provided with MATLAB® codes (downloadable from http://extras.springer.com/) to give readers guidance in working with more difficult optimal and suboptimal controls.

Academic researchers studying control of a variety of real processes in chemistry, biology, transportation, digital communication networks and mechanical systems that are subject to time delays will find the results presented in Stabilizing and Optimizing Control for Time-Delay Systems to be helpful in their work. Practitioners working in related sectors of industry will also find this book to be of use in developing real-world control systems for the many time-delayed processes they encounter.