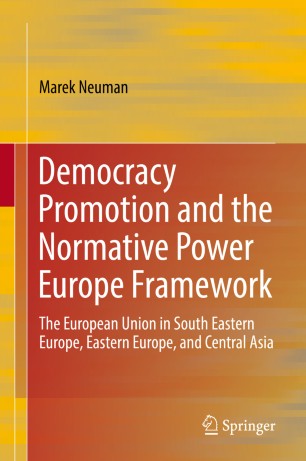 This book presents a topical, holistic assessment of the European Union’s democracy promotion in South-East Europe, Eastern Europe, and Central Asia, analyzed through the prism of the Normative Power Europe (NPE) framework of transnational policy formation. To do so, it brings together three scholarly domains that traditionally stand apart and are discussed separately. The first addresses the notion of the European Union conducting a normatively-driven foreign policy both near and far abroad. The second is concerned with the legitimacy, operationality, and effectiveness of promoting democracy in third-world countries. The third addresses the quality of the relationship the European Union has been able to establish with some vital – yet often troubled – countries in South-East Europe, Eastern Europe, and Central Asia. Finally, based on the empirical findings presented in each chapter, this volume concludes by rethinking the concept and relevance of NPE to the field’s understanding of the EU’s foreign policy making. This edited volume offers the reader both a theoretically and empirically rich analysis of the European Union’s efforts to promote democracy abroad. As such is scholars and students of EU studies, particularly EU foreign policy, as well as policy makers at EU and national level and civil society representatives responsible for designing/implementing democracy promoting projects on the ground.

Marek Neuman is Assistant Professor at the University of Groningen in the Netherlands, where he conducts research into the European Union’s foreign policy. He is particularly interested in the EU’s external democratization policy towards the near and far abroad. Further, he focuses on the European Union’s relations with Eastern Europe, particularly Russia, which he regularly visits as a research and teaching fellow.

“The book is surprisingly coherent for an edited volume. It is carefully edited, and the individual chapters position themselves very clearly in relation to the book’s broad theoretical framework. … While using NPE as a framework to explain EU democracy promotion will mainly be of interest to academic readers, there is plenty of relevant insight in this volume for policy practitioners as well, especially in the empirical chapters.” (Balazs Szent-Ivanyi, Democratization, Vol. 26 (3), 2019)
Buy options