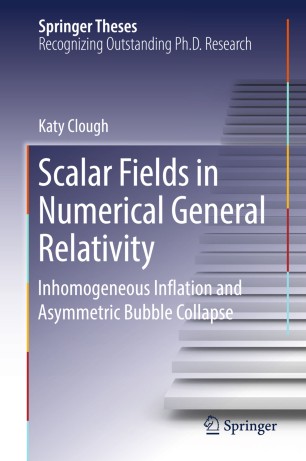 This book explores the use of numerical relativity (NR) methods to solve cosmological problems, and describes one of the first uses of NR to study inflationary physics. NR consists in the solution of Einstein’s Equation of general relativity, which governs the evolution of matter and energy on cosmological scales, and in systems where there are strong gravitational effects, such as around black holes. To date, NR has mainly been used for simulating binary black hole and neutron star mergers like those detected recently by LIGO. Its use as a tool in fundamental problems of gravity and cosmology is novel, but rapidly gaining interest.
The author investigates the initial condition problem in early universe cosmology – whether an inflationary expansion period could have “got going” from initially inhomogeneous conditions – and identifies criteria for predicting the robustness of particular models. Further, it develops state-of-the-art numerical relativity tools in order to address this question, which are now publicly available.