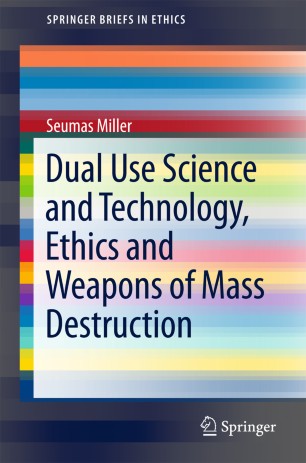 Dual Use Science and Technology, Ethics and Weapons of Mass Destruction

Part of the SpringerBriefs in Ethics book series (BRIEFSETHIC)

This book deals with the problem of dual-use science research and technology. It first explains the concept of dual use and then offers analyses of collective knowledge and collective ignorance. It goes on to present a theory of collective responsibility, followed by four chapters focusing on a particular scientific field or industry of dual use concern: the chemical industry, the nuclear industry, cyber-technology and the biological sciences.

The problem of dual-use science research and technology arises because such research and technology has the potential to be used for great evil as well as for great good. On the one hand, knowledge is a necessary condition, and perhaps a constitutive feature, of technologies that contribute greatly to individual and collective well-being. Consider, for example, nuclear technology that enables the generation of low cost electricity in populations without obvious alternative energy sources. So technological knowledge is a good thing and ignorance of it a bad thing. On the other hand, these same technologies can be extremely harmful to individuals and collectives, as with the atomic bombs dropped on Hiroshima and Nagasaki. So, at least with respect to some technologies evidently knowledge is a bad thing and ignorance a good thing. Accordingly, the question arises as to whether we ought to limit scientific research and/or the development of technology and, if so, which research or technology, in what manner and to what extent. This book examines the answer to that question.

Seumas Miller holds research positions at the Australian Graduate School of Policing and Security, and the Cooperative Research Centre in Cybersecurity at Charles Sturt University, the 4TU Centre for Ethics and Technology at Delft University of Technology and the Uehiro Centre for Practical Ethics at the University of Oxford. He is the author or coauthor of 20 books, including Ethical and Philosophical Consideration of the Dual Use Dilemma in the Biological Sciences (Springer 2008), Terrorism and Counter-terrorism (Blackwell, 2009), The Moral Foundations of Social Institutions (CUP, 2010), Shooting to Kill: The Ethics of Police and Military Use of Lethal Force (OUP, 2016, and Institutional Corruption (CUP, 2017).

“Seumas Miller’s book delivers in spades: It is a most interesting and thought-provoking volume, jam-packed with ideas. … this is by far the best work I have read on dual use and I recommend it without reservation.”(John Forge, Metascience, September, 2018)
Buy options