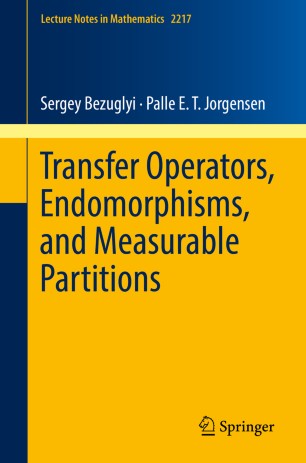 The subject of this book stands at the crossroads of ergodic theory and measurable dynamics. With an emphasis on irreversible systems, the text presents a framework of multi-resolutions tailored for the study of endomorphisms, beginning with a systematic look at the latter. This entails a whole new set of tools, often quite different from those used for the “easier” and well-documented case of automorphisms. Among them is the construction of a family of positive operators (transfer operators), arising naturally as a dual picture to that of endomorphisms. The setting (close to one initiated by S. Karlin in the context of stochastic processes) is motivated by a number of recent applications, including wavelets, multi-resolution analyses, dissipative dynamical systems, and quantum theory.
The automorphism-endomorphism relationship has parallels in operator theory, where the distinction is between unitary operators in Hilbert space and more general classes of operators such as contractions. There is also a non-commutative version: While the study of automorphisms of von Neumann algebras dates back to von Neumann, the systematic study of their endomorphisms is more recent; together with the results in the main text, the book includes a review of recent related research papers, some by the co-authors and their collaborators.

Palle Jorgensen is a Professor of mathematics at the University of Iowa, Iowa City, USA; previously he taught at Stanford University, at Aarhus University (Denmark), and at the University of Pennsylvania. He is a research mathematician, funded over his career, in part, by the USA Natl. Sci. Foundation (NSF), and by bi-national research grants, most recently BSF (USA-Israel). He has had 27 PhD students. His research papers have appeared in international scientific journals – in mathematics, both pure and applied; including multiple areas: operator algebras, harmonic analysis, stochastic analysis, signal/image processing, and in mathematical physics (quantum theory). His recent research is focused on wavelet theory, dynamical systems, Gaussian processes, subdivision algorithms, spectral-tile duality, scaling and fractals. He has more than 280 published research papers, and is the author of eight books and research monographs.

Sergey Bezuglyi works at the University of Iowa since 2016.He taught also in the Washington University, Ohio State University, and University of Oregon. Most of his research was conducted at the National Academy of Sciences of Ukraine when he was a Leading Researcher at the Institute for Low Temperature Physics in Kharkiv. His areas of interest in pure mathematics are ergodic theory, topological dynamics, operator algebras, functional analysis, and theory of operators.

His research was funded by national and international grants. Sergey Bezuglyi was awarded by the State Prize of Ukrainein 2010 for achievements in the theory of dynamical system.

“This monograph is a good modern source on the theory of transfer operators. The book is addressed to researchers of the dynamical systems theory, as well as to mathematicians from related fields.” (Ivan Podvigin, zbMath 1416.37002, 2019)
Buy options