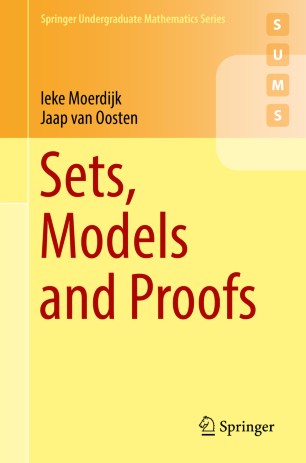 This textbook provides a concise and self-contained introduction to mathematical logic, with a focus on the fundamental topics in first-order logic and model theory. Including examples from several areas of mathematics (algebra, linear algebra and analysis), the book illustrates the relevance and usefulness of logic in the study of these subject areas.

The authors start with an exposition of set theory and the axiom of choice as used in everyday mathematics. Proceeding at a gentle pace, they go on to present some of the first important results in model theory, followed by a careful exposition of Gentzen-style natural deduction and a detailed proof of Gödel’s completeness theorem for first-order logic. The book then explores the formal axiom system of Zermelo and Fraenkel before concluding with an extensive list of suggestions for further study.

The present volume is primarily aimed at mathematics students who are already familiar with basic analysis, algebra and linear algebra. It contains numerous exercises of varying difficulty and can be used for self-study, though it is ideally suited as a text for a one-semester university course in the second or third year.

Both authors have extensive experience in teaching the material covered in this book, and have been active researchers in mathematical logic and related fields. Ieke Moerdijk co-authored the influential Springer text  "Sheaves in Geometry and Logic, a First Course in Topos Theory", together with Saunders Mac Lane. Jaap van Oosten is an expert on realizability models for systems of constructive logic, and is the author of a comprehensive monograph on the subject: "Realizability: An Introduction to its Categorical Side" .

“This text is very well written and does an excellent job introducing the subject matter to a student. Even if your school does not have a course covering these topics, I would recommend the text for a student conducting an independent study of the material.” (Geoffrey D. Dietz, MAA Reviews, July 28, 2019)
“This book is one of a few excellent textbooks for a one-semester introductory mathematical logic course for undergraduate students with relevant majors. It achieves a good balance between depth and brevity. It fits the needs of a student who wants to explore the subject but does not want to be bogged down by excessive demands of rigor before appreciation for mathematical logic can be developed. ... This book is short but self-contained and … interesting exercises complement the main theorems.” (Renling Jin, Mathematical Reviews, September, 2019)
Buy options