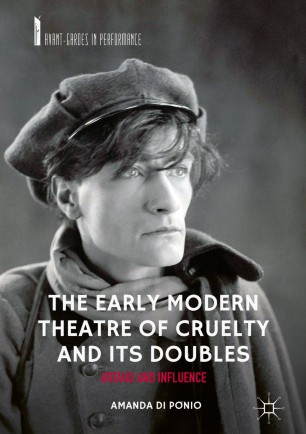 The Early Modern Theatre of Cruelty and its Doubles

Part of the Avant-Gardes in Performance book series (AGP)

This book examines the influence of the early modern period on Antonin Artaud’s seminal work The Theatre and Its Double, arguing that Elizabethan and Jacobean drama and their early modern context are an integral part of the Theatre of Cruelty and essential to its very understanding. The chapters draw links between the early modern theatrical obsession with plague and regeneration, and how it is mirrored in Artaud’s concept of cruelty in the theatre. As a discussion of the influence of Shakespeare and his contemporaries on Artaud, and the reciprocal influence of Artaud on contemporary interpretations of early modern drama, this book is an original addition to both the fields of early modern theatre studies and modern drama.

Amanda Di Ponio is Assistant Professor of English and Cultural Studies at Huron University College in London, Ontario, Canada. She completed her doctoral studies at the University of St Andrews. Her areas of interest include drama and performance, early modern social history, and twentieth-century theory.