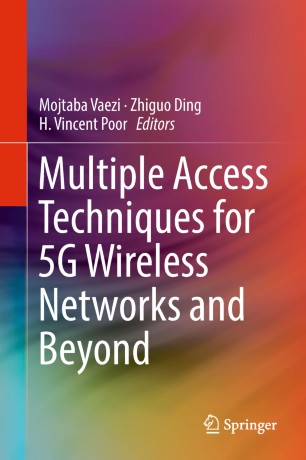 Multiple Access Techniques for 5G Wireless Networks and Beyond

This book presents comprehensive coverage of current and emerging multiple access, random access, and waveform design techniques for 5G wireless networks and beyond. A definitive reference for researchers in these fields, the book describes recent research from academia, industry, and standardization bodies. The book is an all-encompassing treatment of these areas addressing orthogonal multiple access and waveform design, non-orthogonal multiple access (NOMA) via power, code, and other domains, and orthogonal, non-orthogonal, and grant-free random access. The book builds its foundations on state of the art research papers, measurements, and experimental results from a variety of sources. Notably, it

Mojtaba Vaezi received the Ph.D. degree in Electrical Engineering from McGill University in 2014. Since 2015 he has been with Princeton University as a Postdoctoral Research Fellow and Associate Research Scholar. He is currently an Assistant Professor of ECE at Villanova University and a Visiting Research Collaborator at Princeton University. Before joining Princeton, he was a researcher at Ericsson Research in Montreal, Canada. His research interests include the broad areas of information theory, wireless communications, and signal processing, with an emphasis on physical layer security and radio access technologies. Among his publications in these areas is the book Cloud Mobile Networks: From RAN to EPC (Springer, 2017). Dr. Vaezi has served as the president of McGill IEEE Student Branch during 2012-2013. He is an Associate Editor of IEEE Communications Magazine and IEEE Communications Letters. He has co-organized four international NOMA workshops at VTC-Spring’17, Globecom'17, ICC'18, and Globecom'18. Dr. Vaezi is a recipient of a number of academic, leadership, and research awards, including McGill Engineering Doctoral Award, IEEE Larry K. Wilson Regional Student Activities Award in 2013, the Natural Sciences and Engineering Research Council of Canada (NSERC) Postdoctoral Fellowship in 2014, and Ministry of Science and ICT of Korea's best paper award in 2017.

Zhiguo Ding received his B.Eng. in Electrical Engineering from the Beijing University of Posts and Telecommunications in 2000, and the Ph.D. degree in Electrical Engineering from Imperial College London in 2005. From Jul. 2005 to Apr. 2018, he was working in Queen’s University Belfast, Imperial College, Newcastle University and Lancaster University. Since Apr. 2018, he has been with the University of Manchester as a Professor in Communications. From Sept. 2012 to Sept. 2018, he has also been an academic visitor in Princeton University. Dr. Ding’s research interests are 5G networks, game theory, cooperative and energy harvesting networks and statistical signal processing. He is serving as an Editor for IEEE Transactions on Communications and IEEE Transactions on Vehicular Technology. He served as an Editor for IEEE Wireless Communication Letters, IEEE Communication Letters, and Journal of Wireless Communications and Mobile Computing. He received the best paper award in IET Comm. Conf. on Wireless, Mobile and Computing, 2009 and the IEEE WCSP 2015, IEEE Transactions on Vehicular Technologies Top Editor 2017, and the EU Marie Curie Fellowship 2012-2014.

H. Vincent Poor received the Ph.D. degree in EECS from Princeton University in 1977. From 1977 until 1990, he was on the faculty of the University of Illinois at Urbana-Champaign. Since 1990 he has been on the faculty at Princeton, where he is currently the Michael Henry Strater University Professor of Electrical Engineering. During 2006 to 2016, he served as Dean of Princeton’s School of Engineering and Applied Science. His research interests are in the areas of information theory and signal processing, and their applications in wireless networks, energy systems and related fields. Dr. Poor is a member of the National Academy of Engineering and the National Academy of Sciences, and is a foreign member of the Chinese Academy of Sciences, the Royal Society, and other national and international academies. Other recognition of his work includes the 2017 IEEE Alexander Graham Bell Medal, and honorary doctorates and professorships from a number of universities,