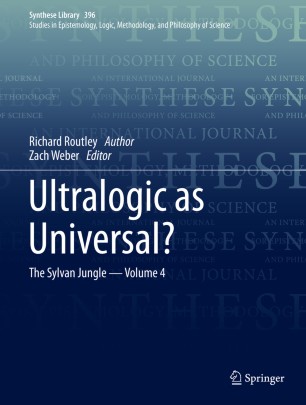 Ultralogic as Universal? is a seminal text in non-classcial logic. Richard Routley (Sylvan) presents a hugely ambitious program: to use an 'ultramodal' logic as a universal key, which opens, if rightly operated, all locks. It provides a canon for reasoning in every situation, including illogical, inconsistent and paradoxical ones, realized or not, possible or not. A universal logic, Routley argues, enables us to go where no other logic—especially not classical logic—can.

Routley provides an expansive and singular vision of how a universal logic might one day solve major problems in set theory, arithmetic, linguistics, physics, and more. It circulated in typescript in the late 1970s before appearing as the Appendix to Exploring Meinong's Jungle and Beyond. With engaging, forceful prose, unsparing criticism of entrenched institutions, and many tantalizing proof sketches (is the Axiom of Choice a theorem of naive set theory?), Ultralogic? has had a major influence on the development of paraconsistent and relevant logic.

This new edition makes this work available for a modern audience, newly typeset and corrected, along with extensive notes, and new commentary essays.