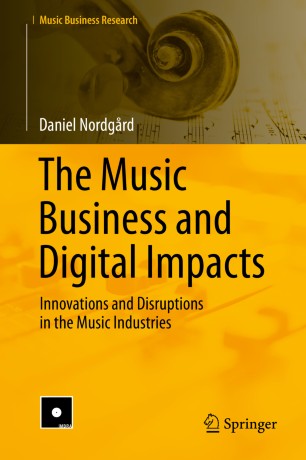 The Music Business and Digital Impacts

Innovations and Disruptions in the Music Industries

This book provides rare insights into the difficult and complex dialogues between stakeholders within and outside the music industries in a time of transition. It builds on a series of recorded meetings in which key stakeholders discuss and assess options and considerations for the music industries’ transition to a digital era. These talks were closed to the public and operated under the Chatham House Rule, which means that they involved a very different type of discussion from those held in public settings, panels or conferences. As such, the book offers a much more nuanced understanding of the industries’ difficulties in adjusting to changing conditions, demonstrating the internal power-struggles and differences that make digital change so difficult.

After presenting a theoretical framework for assessing digital change in the music industries, the author then provides his research findings, including quotes from the Kristiansand Roundtable Conference. Following from these findings, he develops three critical concepts that explain the nature as well as the problems of the music industries’ adaptation process. In conclusion, he challenges the general definition of crisis in the music industries and contradicts the widely held view that digitalization is a case of vertical integration.

Daniel Nordgård has a broad musical background, foremost as a musician and artist, but also as a project manager occupying different positions in the Norwegian music business. In particular, Nordgård has worked for music festivals and the live-sector in various positions. In 2007 and 2008, he was festival manager of the Quart Festival. Nordgård recently finished his doctorate in music with the dissertation Determining Factors on Digital Change in the Music Industries (2017). He teaches music business at the University of Agder’s master’s program on music management and works as a senior researcher at Agder Research, a private research institute. Nordgård’s work focuses on the music industry and the cultural industries, with a special emphasis on digital change. In 2013, he was appointed to lead the Norwegian Government’s committee on digital change in the music industry. Daniel Nordgård holds several positions on different national and international boards, including Gramo (the Norwegian collecting society for recording artists and record companies), The Norwegian Film Institute, and Gramart (the Norwegian featured artist organization). He is also a member of the board of the International Music Business Research Association (IMBRA).