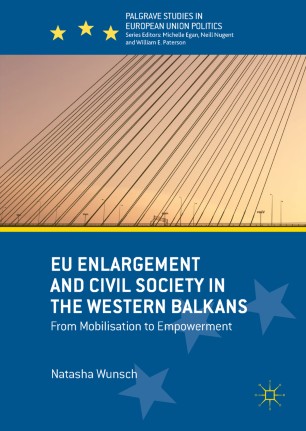 EU Enlargement and Civil Society in the Western Balkans

From Mobilisation to Empowerment

“This book makes a significant contribution to our understanding of new modes of governance in the Western Balkans. It provides an empirically-grounded, comparative perspective on the impact of EU accession on state and non-state actors that is meticulous, detailed, and truly ‘bottom-up’. It will rapidly become a key reference for scholars interested in the region, the impact of Europeanisation, and the ubiquitous institutions of ‘civil society’.”

“A comprehensive and insightful study into the growth, empowerment and limitations of civil society in the Western Balkans region that brings a timely and much needed shift away from a Eurocentric approach.”

“This excellent book makes a well-researched, timely contribution to the literature on the European Union’s impact on the rule of law in EU candidate countries. Through in-depth original research, it demonstrates convincingly the scope and limits of civil society empowerment during the EU accession process.”

This book examines civil society empowerment during the EU enlargement process. Building on extensive fieldwork, it compares mobilisation around rule of law issues in Croatia, Montenegro, and Serbia. Moving beyond the traditional focus on the top-down impact of EU support, it demonstrates NGOs’ agency and analyses their shifting strategies throughout the membership negotiations. Its approach and findings will appeal to scholars and advanced students of EU integration, social movements, and the politics of South East Europe.

Natasha Wunsch is Postdoctoral Researcher in the European Politics Group at ETH Zurich, Switzerland, and Associate Fellow with the German Council on Foreign Relations (DGAP). Her research has appeared, among others, in the Journal of European Public Policy, Acta Politica, and East European Politics.