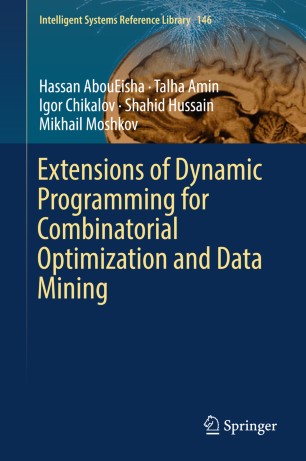 Extensions of Dynamic Programming for Combinatorial Optimization and Data Mining

Dynamic programming is an efficient technique for solving optimization problems. It is based on breaking the initial problem down into simpler ones and solving these sub-problems, beginning with the simplest ones. A conventional dynamic programming algorithm returns an optimal object from a given set of objects. This book develops extensions of dynamic programming, enabling us to (i) describe the set of objects under consideration; (ii) perform a multi-stage optimization of objects relative to different criteria; (iii) count the number of optimal objects; (iv) find the set of Pareto optimal points for bi-criteria optimization problems; and (v) to study relationships between two criteria. It considers various applications, including optimization of decision trees and decision rule systems as algorithms for problem solving, as ways for knowledge representation, and as classifiers; optimization of element partition trees for rectangular meshes, which are used in finite element methods for solving PDEs; and multi-stage optimization for such classic combinatorial optimization problems as matrix chain multiplication, binary search trees, global sequence alignment, and shortest paths. The results presented are useful for researchers in combinatorial optimization, data mining, knowledge discovery, machine learning, and finite element methods, especially those working in rough set theory, test theory, logical analysis of data, and PDE solvers. This book can be used as the basis for graduate courses.