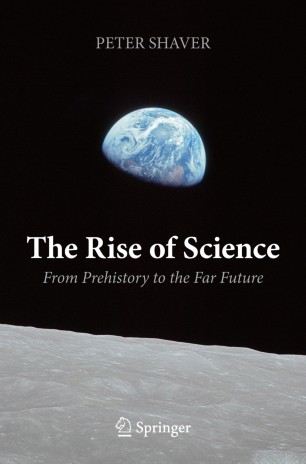 The Rise of Science

From Prehistory to the Far Future

How did science rise up to so dramatically change our world, and where will it take us in the future? This book gives a unique and broad overview. A brief history reveals the major phases and turning points in the rise of science from the earliest civilizations to the present: How was science ‘discovered’? Why did it disappear a few times? When did it become ‘modern’? A critical assessment examines how science actually ‘happens’: the triumphs, the struggles, the mistakes and the luck.

Science today is endlessly fascinating, and this book explores the current exponential growth, curiosity-driven vs. goal-oriented research, big and small science, the support of science, the relation of science to society, philosophy and religion, and the benefits and dangers of science.

Finally a glimpse into the future: Will the current pace of science continue? Will we ever go backwards (again)? What remains to be discovered? Can science ever be complete? What can we imagine for the distant future?

This book will be of wide interest to the general reader as well as to students and working scientists.

This book provides a fresh, unique and insightful coverage of the processes of science, its impact on society and our understanding of the world, based on the author’s experience gained from a lifetime in science.
Ron Ekers, FRS, CSIRO Fellow, CSIRO Astronomy & Space Science, Former President of the International Astronomical Union

Peter Shaver's comprehensive and lively survey deserves a wide readership. Scientific discoveries are part of our global culture and heritage, and they underpin our lives. It's fascinating to learn how they were made, and how they fit into the grand scheme. This book isn't just for scientists - it's written for all of us.
Martin Rees, FRS, Astronomer Royal, Former President of the Royal Society and Former Master of Trinity College, Cambridge

This book offers a wonderfully concise and accessible insight into science – its history, breadth and future prospects. Peter Shaver gives a feeling for what it actually means to be a practicing scientist.
Stephen Simpson, FRS, Academic Director, Charles Perkins Centre, School of Life and Environmental Sciences, University of Sydney

The author is Canadian, obtained a B.Sc in Engineering Physics at Queen’s University in Canada and a Ph.D in Astrophysics at the University of Sydney in Australia, and spent most of his career as a senior scientist at the European Southern Observatory (ESO), based in Munich. He has authored or co-authored over 250 scientific papers, edited six books on astronomy and astrophysics, and written the book Cosmic Heritage: Evolution from the Big Bang to Conscious Life, published in 2011. His scientific interests have ranged from our galaxy to distant quasars and the reionization of the universe. A member of various international organizations and committees, he served as President of the International Astronomical Union’s Division on Galaxies and the Universe and was instrumental in the establishment of Europe’s participation in the Atacama Large Millimeter/submillimeter Array (ALMA) project. Now retired, he and his Australian wife split their time between Sydney, Toronto and Europe, and he devotes himself to broadening his horizons in science, in the process having written this book.

“The Rise of Science provides an important contribution in how scientists of the past, present, and future have generated knowledge across the full spectrum of scientific fields. … this short volume offers a veritable smorgasbord of factors that motivate scientists, all of which warrant further examination and development.” (Frederick R. Davis, The Quarterly Review of Biology, Vol. 94 (4), December, 2019)
“This book delivers a magnificent, outstanding and informative understanding of the evolution of science. … As well as being a comprehensive history of science, this is a well-written and very readable volume, with the author's enthusiasm and authority shining through.” (Gerrard Russell, Magonia review of books, pelicanist.blogspot.com, January, 2019)
“I enjoyed reading the book because it allowed me to brush up on the developments which happened as recently during the past 100 years, the lifetime of our parents and ourselves as well as to judge the 'rise of science' from a distant, but highly educated standpoint that allows me to draw my own conclusions. A book that definitely inspires own reflections and expands the horizon.” (Joachim J. Kehr, Journal of Space Operations & Communicator, Vol. 16 (1), November, 2018)
“Modern science as we know it owes everything to Greek civilization. … I can recommend this book as a good read, and it is very useful in that it contains both a subject and a name index.” (John Silvester, Odyssey The e-Magazine of the British Interplanetary Society, issue 58, 2019)
Buy options