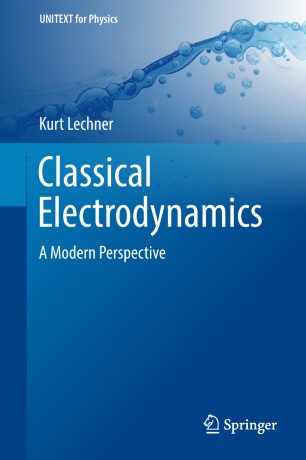 This book addresses the theoretical foundations and the main physical consequences of electromagnetic interaction, generally considered to be one of the four fundamental interactions in nature, in a mathematically rigorous yet straightforward way. The major focus is on the unifying features shared by classical electrodynamics and all other fundamental relativistic classical field theories. The book presents a balanced blend of derivations of phenomenological predictions from first principles on the one hand, and concrete applications on the other. Further, it highlights the internal inconsistencies of classical electrodynamics, and addresses and resolves often-ignored critical issues, such as the dynamics of massless charged particles, the infinite energy of the electromagnetic field, and the limits of the Green’s function method. Presenting a rich, multilayered, and critical exposition on the electromagnetic paradigm underlying the whole Universe, the book offers a valuable resource for researchers and graduate students in theoretical physics alike.

Kurt Lechner was born on 15 May 1962, in Brixen, South Tyrol, where he attended the German-speaking J.Ph. Fallmerayer Scientific High School. In 1981 he enrolled in the Master’s course in Physics at the University of Padua, graduating in 1986 with a thesis on supergravity theory, during the period of its first “revolution”. In 1987 he left Padua for Trieste, having won a four-year fellowship for a PhD course in Theoretical Particle Physics at the International School for Advanced Studies. In Trieste, in 1989 he gained the degree of Magister Philosophiae with a thesis on superstring theory, and in 1991 he earned his Doctor Philosophiae in physics with a dissertation on the dynamics of anyons. In 1990, already during his PhD years, the University of Padua offered him a permanent position as an academic researcher in theoretical physics, which he held until 2004, when he became associate professor for Theoretical Physics, Mathematical Methods, and Models in the Department of Physics and Astronomy. Since 2006 he has been visiting professor at the Scuola Galileiana di Studi Superiori of the University of Padua. His preferred research subjects include superstring theory, brane physics, quantum anomalies, duality, and advanced classical electrodynamics. He is the author of more than 50 peer-reviewed publications in international journals.