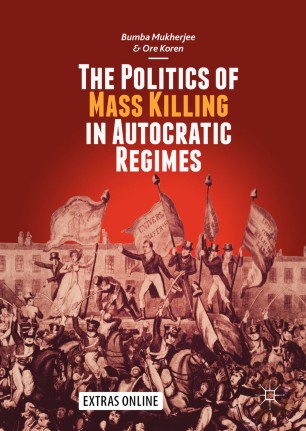 The Politics of Mass Killing in Autocratic Regimes

This book develops a detailed, disaggregated theoretical and empirical framework that explains variations in mass killing by authoritarian regimes globally, with a specific focus on Pakistan, Indonesia, and Malaysia. Using a combination of game-theoretic, statistical, and qualitative approaches, this project explicates when civilians within nondemocratic states will mobilize against the ruling elite, and when such mobilization will result in mass killing. In doing so, it illustrates the important role urbanization and food insecurity historically played, and will continue to play, in generating extreme forms of civilian victimization.

Bumba Mukherjee is Professor of Political Science at Penn State University, USA. He has been Visiting Research Scholar and Faculty Fellow at Princeton University and Visiting Faculty Fellow at the University of Notre Dame, USA. He is the author of Democracy and Trade Policy in Developing Countries (2016), Politics of Corruption in Dictatorships (2016), and Democracy, Electoral Systems and Judicial Empowerment (2014).

Ore Koren is Assistant Professor of Political Science at Indiana University, Bloomington, USA. Previously, he was U.S. Foreign Policy and International Security Fellow at Dartmouth College and a Jennings Randolph Fellow at the United States Institute of Peace. His research has appeared in multiple academic journals, including Journal of Politics, International Studies Quarterly and American Journal of International Economics.