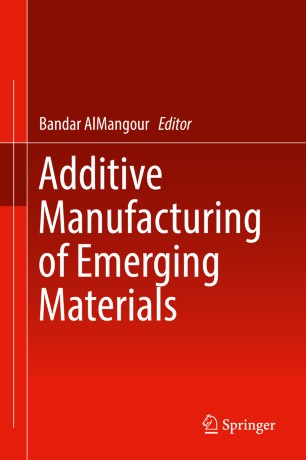 This book provides a solid background for understanding the immediate past, the ongoing present, and the emerging trends of additive manufacturing, with an emphasis on innovations and advances in its use for a wide spectrum of manufacturing applications. It contains contributions from leading authors in the field, who view the research and development progress of additive manufacturing techniques from the unique angle of developing high-performance composites and other complex material parts. It is a valuable reference book for scientists, engineers, and entrepreneurs who are seeking technologically novel and economically viable innovations for high-performance materials and critical applications. It can also benefit graduate students and post-graduate fellows majoring in mechanical, manufacturing, and material sciences, as well as biomedical engineering.

AlMangour has worked as a Postdoctoral Fellow at Harvard University, School of Engineering and Applied Science during 2017. Bandar AlMangour received his Ph.D. and Master of Science in Materials Science and Engineering from University of California, Los Angeles (UCLA) in 2014 and 2017 respectively, a Master of Engineering in Materials Engineering from McGill University in 2012, and a Bachelor of Science in Mechanical Engineering from King Fahd University of Petroleum and Minerals (KFUPM) in 2005. He served as a Research Engineer at the Saudi Basic Industries Corporation (SABIC) from Jun. 2008–Dec. 2009 and as a Production Supervisor in the Rolling Mills division from Apr. 2005–May 2008 at the Saudi Iron & Steel Company (HADEED), a SABIC affiliate in Jubail, Saudi Arabia. AlMangour is a member of several professional associations and still served as a reviewer in several internationally recognized journals. AlMangour has authored a book published by LAP LAMBERT Academic Publishing (2014) and a chapter for a book published by Nova Science Publishers (2015), as well as a chapter for a book published by Springer (2017).