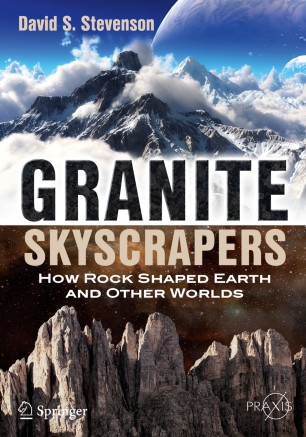 How Rock Shaped Earth and Other Worlds

In this book, David Stevenson offers us a look at the evolution of planets as they move from balls of mixed molten rock to vibrant worlds capable of hosting life. Embedded in our everyday architecture and in the literal ground beneath our feet, granite and its kin lie at the heart of many features of the Earth that we take for granted. From volcanism and mountain building to shifting water levels and local weather patterns, these rocks are closely intertwined with the complex processes that continue to shape and reshape our world.

This book serves as a wonderful primer for anybody interested in our planet’s geological past and that of other planets in our Solar System and beyond. It illustrates not only how our planet’s surface evolved, but also how granite played a pivotal role in the creation of complex, intelligent life on Earth. There has long been a missing element in popular astronomy, which Stevenson now aims to fill: how geological and biological evolution work in a complex partnership, and what our planet’s own diversity can teach us about other rocky worlds.

David Stevenson was born in Paisley, Scotland, in 1968. He studied Molecular Biology at Glasgow University and obtained a PhD in Genetics from the University of Cambridge. He then studied Astronomy and Planetary Sciences and Geophysics and Geochemistry (S267) at the OU.

After a stint in academia, he became a teacher, but continued to write science articles for various publications. In July 2007 an article on Type Ia Supernovae, “A Bigger Bang”, was published in Sky & Telescope, with a second article on supernovae published in the same magazine in October 2011. Three books have followed on supernovae, red dwarf stars and star clusters (Extreme Explosions, Under a Crimson Sun and The Complex Life of Star Clusters, respectively). A further article on stellar mergers is at the production stages with Astronomy magazine, while a spin-off article from Extreme Explosions, “Supersized Stellar Mystery”, was published in Popular Astronomy in February 2014. Despite a background in Biology, the author’s father inspired his interest in Astronomy from an early age. Many parallels can be drawn between the lives of people and those of stars. Exploring the cross-roads of different scientific disciplines is a key interest and motivation in both teaching and writing.

His publishing history includes peer-review Biological research articles from 1999-2009, including an article on the early development of life, “The Origin of Translation” published in the Journal of Theoretical Biology (Elsevier Press) and an article on the discovery of antibiotic resistance genes in plants, published in Plant Physiology; numerous articles published on the Blackwell Plant Sciences website 2002-2007; “Turning out the Lights” – Popular Astronomy August, 2003; “A Bigger Bang” Sky & Telescope, July 2007; “Exceptional Explosions”, Sky & Telescope, October 2011; “Extreme Explosions” and “Under a Crimson Sun” books, Springer 2013; "Supersized Stellar Mystery", Popular Astronomy, January 2014; "The Complex Life of Star Clusters", Springer, May 2015; and “Stellar Mergers” in production with Astronomy magazine, [due July 2016;]  "The Exo-weather Report", Springer, is due in Summer 2016.

Selected by Choice magazine as an Outstanding Academic Title for 2019

“Stevenson's review of the expansion and destruction of major continental masses through time is impressive, as is his projection of potential future plate tectonic events and related igneous activity based on the work of many qualified research scientists. … This outstanding book is recommended for a wide range of upper-level Earth science students and practicing professionals. Summing Up: Highly recommended. Advanced undergraduates through faculty and professionals.” (M. E. McCallum, Choice, Vol. 56 (11), July, 2019)

“This book is great reading for anybody seeking a broad introduction to recent research on our planet’s geological past and that of other bodies in the Solar System.  … The style of referencing is admirable: … . This is essential when reporting interdisciplinary research to people unfamiliar with the field.” (Simon Mitton, The Observatory, Vol. 139 (1270), June, 2019)