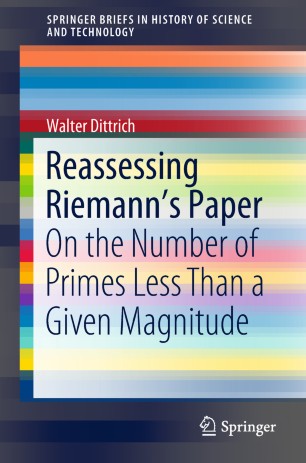 On the Number of Primes Less Than a Given Magnitude

In this book, the author pays tribute to Bernhard Riemann (1826–1866), mathematician with revolutionary ideas, whose work on the theory of integration, the Fourier transform, the hypergeometric differential equation, etc. contributed immensely to mathematical physics. This book concentrates in particular on Riemann’s only work on prime numbers, including such then new ideas as analytical continuation in the complex plane and the product formula for entire functions. A detailed analysis of the zeros of the Riemann zeta function is presented. The impact of Riemann’s ideas on regularizing infinite values in field theory is also emphasized.

Prof. Dr. Walter Dittrich was head of the quantum electrodynamics group at the University of Tübingen before his retirement in 2001 and is still actively publishing papers and books in classical and quantum physics. He received his doctorate under Prof. Heinz Mitter at Heisenberg’s institute in Munich and continued pre- and postdoc work at Brown University, Harvard and MIT. He profited immensely from lectures by and discussions with Profs. Herb Fried, Ken Johnson, Steve Weinberg, Julian Schwinger and, later on, at the Institute for Advanced Study (IAS) in Princeton, Steve Adler and David Gross at Princeton University. He started his work on gauge theories and QED in collaboration with Schwinger in the late 1960s. He was visiting professor at UCLA, Berkeley, Stanford and the IAS. He has over 30 years of teaching experience and is one of the key scientists in developing the theoretical framework of quantum electrodynamics.