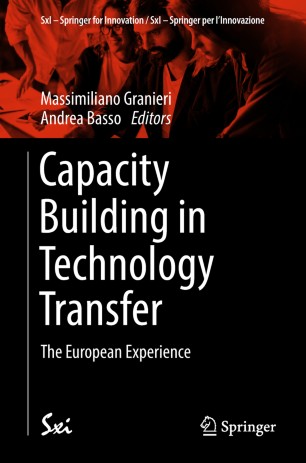 This book tells the story of capacity building in Europe with respect to technology transfer offices and organizations (TTOs). The traditional underdevelopment of technology markets in Europe has often been explained in terms of lack of capacity and skills among technology transfer professionals, both as individuals and as part of TTOs. Because of the severe consequences for economic development and industrial growth, this situation has been repeatedly addressed by policy makers, until the European Commission, within the framework of Horizon 2020, decided to initiate a pan-European pilot project on capacity building. This book builds on the experience gained through that project and tries to reconnect it with current scholarly works on technology management by focusing on the new methodology developed. In addition, the authors present a series of case studies that may be used as a benchmark and as examples that will help high-potential TTOs to improve their performance. Both practitioners and researchers will benefit from the holistic perspective of the book, which goes beyond the traditional approach and attempts to reconcile the theory and practice of organizing for technology transfer.

Massimiliano Granieri is an Associate Professor in the Department of Mechanical and Industrial Engineering at the University of Brescia – Health and Wealth, Italy. His research interests focus on Intellectual Property and Comparative Legal Systems. He previously taught Economic Analysis of Law and Comparative Private Law at the University of Foggia (2005–15). After graduating in Law at LUISS “Guido Carli” (summa cum laude), he earned a Master of Laws (LLM) at the University of California at Berkeley and a PhD in Comparative Law at the University of Florence. In 2002 the Nuffield College of Oxford awarded him the Jemolo Fellowship. Dr. Granieri serves as Vice President of MITO Technology, and was former Vice President for Survey/Metrics at ASTPProton, and a board member of Netval. He has previously served as a member of the European Intellectual Property Expert Group of DG Enterprise of the European Commission. He is the author of more than 100 articles and five books in the fields of intellectual property, technology transfer, antitrust, and economic analysis of law.
Andrea Basso serves as CTO of MITO Technology, with responsibility for the definition and evolution of MITO strategic technology areas. He serves as Adjunct Associate Professor in the Department of Electrical and Computer Engineering at the University of Victoria, British Columbia, Canada. He holds a Master’s degree in Electrical Engineering from the University of Trieste and gained his PhD from the Signal Processing Laboratory of the Swiss Federal Institute of Technology (EPFL). Dr. Basso is a hands-on senior executive with 15+ years of operational, engineering, and business leadership experience across a broad range of technologies and services. He was previously CEO of Sisvel Technology, CTO of Sisvel and Research Manager in Bell Laboratories and later in AT&T Research Multimedia Services and Technologies Department (USA). Dr. Basso is recognized both as an experienced leader and as an exceptional business strategist. He has conceived and incubated technology and service concepts with revenue potential exceeding than $500M over 5 years and is the inventor or co-inventor of more than 100 granted patents. He is also the author of over 60 papers and books.