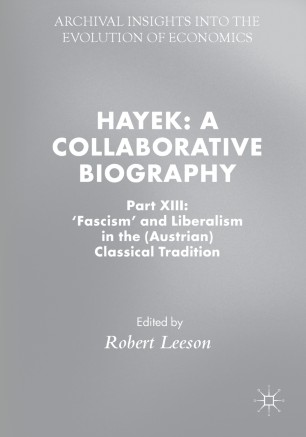 Part XIII: 'Fascism' and Liberalism in the (Austrian) Classical Tradition

Hayek claimed that he always made it his rule ‘not to be concerned with current politics, but to try to operate on public opinion.’ However, evidence suggests that he was a party political operative with ‘free’ market scholarship being the vehicle through which he sought – and achieved – party political influence. The ‘main purpose’ of his Mont Pelerin Society had ‘been wholly achieved’. Mises promoted ‘Fascists’ including Ludendorff and Hitler, and Hayekians promoted the Operation Condor military dictatorships and continue to maintain a ‘united front’ with ‘neo-Nazis.’ Hayek, who supported Pinochet’s torture-based regime and played a promotional role in ‘Dirty War’ Argentina, is presented as a saintly figure.
These chapters place ‘free’ market promotion in the context of the post-1965 neo-Fascist ‘Strategy of Tension’, and examine Hayek’s role in the promotion of deflation that facilitated Hitler’s rise to power; his proposal to relocate Gibraltarians across the frontier into ‘Fascist’ Spain; the Austrian revival of the 1970s; the role of (what was presented as) ‘neutral academic data’ on behalf of the ‘International Right’ and their efforts to promote Franz Josef Strauss and Ronald Reagan and defend apartheid and the Shah of Iran